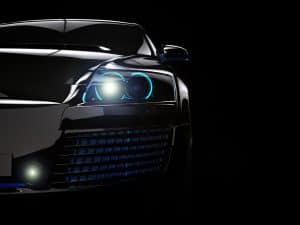 Li-Fi has historically been considered an indoor technology, yet some industry experts believe it will be important to the automotive industry.

Li-Fi is an exciting new technology that promises cheap, fast, and secure local Internet connections. In the case of cars, Li-Fi can transmit data from the headlights of one vehicle to the camera of another via light-emitting diodes (LED). Li-Fi may be particularly useful in hospitals, power plants, airplanes, and enclosed environments where radio frequencies are an issue. Li-Fi connections are broadcast over the air through a light-emitting diodes (LED) broadcaster and support rates up to 100Gbit/s. In an outdoor environment, Its signals can travel 100-200 meters and bounce off reflective surfaces before the signal is picked up by a receiver. The light can work when it is dimmed (as long as the light is powered) and does not need to be in direct line-of-sight, and can work outside as well.

One of the interesting aspects of Li-Fi is that it cannot go through walls, and thus a private local area network (LAN) can be created by lighting up a closed room. An interesting application for the technology could be providing Internet access for airplanes since Li-Fi, unlike Wi-Fi, does not interfere with the navigation system (although I do not know how Li-Fi would account for windows). Hospitals may also be interested in the technology as an added security way to protect health data as mandated by government regulations. Any organization that needs to keep information within the four walls, such as military bases and banks, can use the technology to keep data restricted to a single room.

I recently had the chance to discuss this new technology with Wadih Elie Tannous of Applied Advanced Scientific Analysis, Inc. (AASA Inc.), whose organization is running a testbed with the Industrial IoT Consortium (IIC) to illustrate how Li-Fi can be used to remotely manage the software of a fleet of vehicles. Software updates are sent over-the-air (OTA) from one vehicle to another through Li-Fi.

Li-Fi has historically been considered an “indoor” technology, yet Tannous and the AASA believe the technology will be important to the automotive industry since Li-Fi can travel over distances in open space. Tannous is one of the leads of the Go Kart testbed in the IIC and discussed the fact that Li-Fi could complement a 5G connection for vehicular connection. When there is no mobile network, the vehicles can still communicate through headlights/taillights and cameras.

Li-Fi can also serve to identify an object’s indoor position more accurately than Wi-Fi or GPS used today (less than 2cm and less than 3 degrees of orientation while it is providing real-time localization (less than 34ms). This accuracy is vital in multiple applications such as navigation In-Door Robots and Drones, Virtual Reality (VR), Augmented Reality (AR), and Gaming, among others.

Li-Fi could be a disruptive technology, and it will be interesting to see what the testbed will teach us. Personally, I wonder how Li-Fi will handle when signals intersect. For example, in a road intersection, will Li-Fi receivers be confused by multiple sources of light? Will Li-Fi signals interfere with each other when they overlap? In a closed environment, the technology can create great security since the walls will keep the data secure- but how do you keep the data safe in an open environment?

The technology can be disruptive because it can open up possibilities in data transfer that are not yet in use. For example, Li-Fi can be useful in emergency situations when the Wi-Fi or mobile networks are down, such as during a hurricane or an earthquake. In that case, the vehicles could connect through Li-Fi and pass important information to emergency services. The protocol could update infrastructure through vehicle-to-infrastructure connections, maintain connections with indoor drones, and otherwise facilitate information flow on the open road. Vehicles can serve as edge cloud servers, which could create new industries where vehicles serve as mobile computers, batteries, and power generators (as I covered before).

I would like to say thank you to Mr. Tannous for discussing this exciting new technology, and I am looking forward to hearing the results from the testbed and future developments.