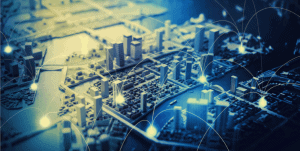 We’re at the early stages of far-reaching and consequential network evolution.

Many are aware of the coming of 5G. It’s about throughput and speed. We’re moving from solving coverage (4G) to supersizing performance (5G). Most of the buzzword compliant future depends on it… mobile video at ultra-high definition, data from Internet of Things (IoT) sensors and applications. Autonomous vehicles. Drones. Augmented reality. Consider this, Intel estimates that a single autonomous vehicle will generate 4 terabytes of data daily.

To achieve the promise of the 5G future, we need more cell nodes. A lot more. At some point, the network may be as ubiquitous as electricity. The edge will live everywhere as we expand from 4G macrocells to 5G microcells. We need to spend more time thinking about that and consider where all that infrastructure will live. We also need more thought on how we keep it running when people need it most… Simply slapping radios on building surfaces will not make the grade when Irma or Harvey arrive again.

See also: The best smart city network – is it LPWA, 5G or mesh?

At the same time as network capacity is exploding, we’re watching IoT devices proliferate exponentially, to instrument every stat that we can conceivably measure. The web of information nodes is multiplying at a comparable rate to expansion of the communications network, with mind-numbing volumes of data. It’s not just autonomous vehicles and video cameras. It’s everything. Weather. Air/water/earth quality. Car/foot/bike and other traffic. Accidents. Hazards. Crime. Noise. Wildlife. Agriculture. Machines and factory activity. Water and sewage systems.

And, with all that data, data processing and compute architectures must change. Peter Levine, a partner at Andreesen Horowitz, gives a great talk on the implications of new data volumes from IoT. Moving compute to the edge is about both latency and tiered data management. We simply can’t expect to send all that data back into the middle. Nor can we, for time-sensitive processing, wait for the network to execute full round trip to the middle and back.

Cell site owners are rethinking network architectures along these lines. Crown Castle recently announced a deal with Vapor.IO to push compute to the very-most edges of the communications network. Other recent announcements and articles underscore that trend.

All the while, we’re also rebuilding our energy network, moving from a hub-and-spoke model to a decentralized network of generation, storage, vehicle charging and balancing assets.

These trends are not independent.

Network intelligence is moving from the middle to the edge on all fronts. The last 15 years of centralization are seeing a new, distributed and decentralized architecture evolve, involving communications, edge computing power, and distributed energy.

The upshot? Our cities themselves are becoming distributed data centers. That leads to key questions:

The answers are tied to standardizing micro data centers that have communications, instrumentation, compute and energy defined in consistent ways so that we move the development of capabilities to a higher level, integrating across systems that were once separate silos.

The good news is that groups like the OpenFog Consortium are starting to tackle standardization and interoperability, ultimately raising the bar of innovation to address more meaningful problems.

We will also need more work around increasingly-sophisticated mesh architectures that enable cities to continue to function flawlessly as a self-healing mesh, even as individual nodes go dark. Here comes the new modern, mesh edge: Communications, information, energy and compute.

Brian Lakamp is a co-founder of Totem Power.