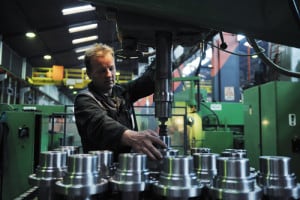 A new McKinsey report argues that most of the value for the IoT lies in business applications such as factories, oil and gas, agriculture, and retail. Challenges include producing actionable insight and demonstrating value. Experts advise to take a “start-up” approach to IoT efforts.

While much of the attention with the Internet of Things (IoT) is now on home thermostats, cars and wearables, the greatest returns from IoT will come out of business-to-business applications. Ultimately, B2B transactions will generate 70 percent of the value of IoT.

That’s the word from a new study published by McKinsey & Company, which estimates that “nearly $5 billion would be generated almost exclusively in B2B settings: factories in the extended sense, such as those in manufacturing, agriculture, and even healthcare environments; work sites across mining, oil and gas, construction and offices.”

The challenge for IoT efforts, explored by Jacques Bughin, Michael Chui, and James Manyika, all with McKinsey, is bringing all the data from various systems and sources, much of it streaming in real time, together into actionable intelligence. Enterprises will need “to develop or purchase, to customize, and then to deploy analytical software that extracts actionable insights from the torrent of data IoT will generate.” In addition, the authors add, “the algorithms embedded in this software will have to analyze data streams in real time—a task many traditional analytical tools are not designed to do.”

Using the “Thing” to Sell: A Look at Retail

They point to the likely value IoT would provide to the retail sector: “sales lift that real-time, in-store personalized offers are expected to deliver.” This will require “the sophisticated integration of data across many sources: real-time location data (the shopper’s whereabouts in a store), which would link to data from sensors in the building; customer-relationship-management data, including the shopper’s online-browsing history; and data from tags in the items on display, telling the customer to enter a specific aisle, where he or she could use an instant coupon sent to a phone to buy an item previously viewed online.”

In a related discussion among IoT leaders, also published by McKinsey, there is agreement that IoT initiatives need to be lifted out of the technical weeds and begin demonstrating value to the business. “There is real business value in all of this data,” says Mike Olson. “It’s not that hard to find important uses cases, but you want to do that in lockstep with thinking about how you’re going to secure it and how you’re going to manage it.”

Industry leaders suggest that much of IoT is unexplored territory, and the best approach to building it is to support self-contained, innovative efforts. “Take 10 percent of your R&D budget, carve it off, set it aside, and reinvest it in internal, lean start-ups,” says Mark Hatch. “Put them in a different building, give them 10 percent. Their objective is to match whatever R&D is doing on the other side. So it’s a ‘10x’ objective.”

Still, a lot of education across enterprises is going to be required to support a successful IoT effort. “IoT is still an acronym that nobody understands,” says Mark Hatch, CEO and co-founder of TechShop and a leader in the global “maker” movement. “It’s an enormous opportunity, and we’re not paying anywhere near enough attention to it. We may have one officer who’s thinking about it, but we don’t have large teams that are working out of major corporations. This is something that you can invest in. It certainly won’t give you next quarter, but out a year or two, it could completely change the way you compete. And I don’t think we’re spending anywhere near enough effort on it.”