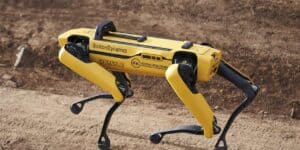 An open-source software framework produced by Carneige Mellon University aims to improve the research and development of four-legged robots.

A new open-source robotics software framework aims to improve the testing and development of quadrupedal locomotion in robots.

Developed by Aaron Johnson’s Robomechanics Lab at Carnegie Mellon University, the full-stack SDK, named Quad-SDK, provides researchers with a wide range of algorithms, tools, and infrastructure to improve the speed and sophistication of robotic research.

Quad-SDK aims to be all of the things that the team struggled to find in robotics software solutions in the past. It is open-sourced, modular, and provides end-to-end functionality.

The project was developed over a two year period, with graduate students from multiple robotics disciplines contributing to it. The SDK is compatible with the Robot Operating System (ROS), a middleware suite with a set of software frameworks specific to robotics development.

“Locomotion is a layered problem and Quad-SDK provides a framework for robotics researchers and developers to focus their efforts on the core algorithms instead of the software tooling and infrastructure,” said Giordana Verrengia of Carnegie Mellon University. “Other software packages are very good at solving one component, like motion planning, but it’s critical to have end-to-end frameworks that provide the necessary algorithms, tools, and infrastructure for performing high-quality robotics research.”

Developing robotics for four-legged robots is a tricky challenge, as more components need to work together seamlessly to perform actions. Robotics engineers do see the value in the orientation however, with Boston Dynamics building most of its robots on four legs.

Early trials of these robots have been used to aid in disaster recovery, by getting inside buildings that humans cannot, and as a way to monitor the environment. With more software tools like Quad-SDK made available to developers, we may see more use-cases open up in the future.