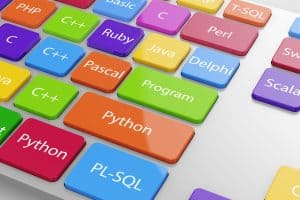 R and Python are the two most widely used programming languages by data scientists worldwide. However, based on their preference, they may choose what best suits them.

In a world where 2.5 quintillion bytes of data or more is generated within a single day, becoming a data scientist is the perfect plan to start your career in this thriving data science industry.

More than just the exciting career ahead, you need to figure out an effective plan and start with the basic foundation. R and Python programming languages for data science or something else?

Are you in a state of disarray?

Well, the solution is simple. Learn both R and Python programming. The perfect blend of getting into a data science career.

For professionals already in the data science industry, they can choose any one of the programming languages based on the project they’re working on.

To be honest, both R and Python are ideal programming languages for every data science aspirant out there.

Is there a solution?

Both are excellent programming tools. However, there are certain parameters you need to consider before starting your data science work.

Based on widely cited comparisons by Norm Matloff, Prof. of Computer Science, UC Davis using seven parameters, you can now determine which programming language will be the best fit. Comparison elements to consider include:

R is the winner since even novices can perform simple data analyses within a few minutes time.

While Python can get a little tricky because of their libraries. For data science, professional who’s just started with data science must first learn how to use Python libraries such as Pandas, MatPlotlib, matrix types, NumPy that are likely already built into base-R.

Fueled by machine learning and artificial intelligence, Python is now known to be one of the fastest-growing programming languages used by a data science professional. Python ideally offers multiple fine-tuned libraries i.e., AlexNet used for image recognition while the R version needs to be developed.

The Python library is empowered by setting image-smoothing ops. This can be further implemented by R-Keras wrapper. For this purpose, a version of TensorFlow (pure-R) is developed. However, in R, the availability of the packages for gradient boosting and random forest can be superb.

In terms of owning elegance, Python is a winner since it reduces the usage of braces and parentheses during coding, making it much sleeker.

While Python might not provide accuracy in solving a statistical problem.

Both R and Python have objects as functions, but R is most preferred. R has multiple OOP paradigms, while Python only has one. Due to R’s feature of metaprogramming (code that can produce code), most computer scientists are going gaga over R programming.

Data structures such as binary trees can easily be implemented in Python. But if this is done in R, probably the use of “list class” will be required, which is considerably slow.

Much difference won’t be seen even when Python version 2.7X transitions to 3.0X.

But with the impact of RStudio, R is seen to change into two different dialects i.e., R and Tidyverse.

Given the ever-evolving field in data science, some newer tools and technologies keep expanding. Thus, a data science professional should stay in-sync with the present trends in the data science industry.

Python programming language has grown widely amongst the data science community. Why? This is because of their rich repository of libraries that permits data scientists to perform the task that has better code readability, better stability, better modularity, and is an object-oriented language.

At the core, learning both R and Python can be powerful in the data science field. With multiple programming languages that provide much-needed options to execute a data science project, it gets challenging for individuals to be picky with a specific language.

Tech giants such as Facebook, Amazon, Google, Dropbox, and Instagram are already using Python. What do you choose today?