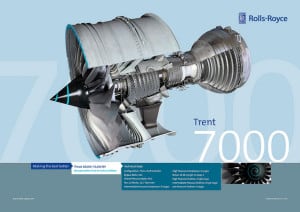 Rolls-Royce is using Microsoft Azure IoT to target use cases in predictive maintenance and fuel efficiency.

The aviation industry is capital intensive and also has high operating and maintenance costs.

A single jet engine can cost $16 million, and on a Transatlantic flight will consume 36,000 gallons of fuel, which at today’s airline fuel prices comes to around $54,000 per trip, or more than $5,000 an hour.  Maintaining the aircraft on the ground can add hundreds of dollars per hour.

Although fuel costs have been falling, airlines are still pursuing ways to reduce running expenses. Some areas being pursued include increasing fuel efficiency of jet engines, optimizing flight paths, and improving maintenance.

Rolls-Royce is well-known for its luxury cars, but its most vibrant business is aircraft engine manufacturing. In fact, the company has more than 13,000 engines for commercial aircraft in service around the world, and for the past 20 years, it has offered customers ongoing engine maintenance services. The company’s Trent series engines are found on aircraft including the Boeing 787 and Airbus A380, A350, and A330neo.

Machine data, however, can create headaches for any company trying to analyze it. A rapidly increasing volume of data coming from different types of aircraft equipment overtook the airlines’ ability to analyze and gain insight from it. A typical aircraft engine is loaded with sensors that generate thousands of real-time signals, covering everything from fuel pump wear-and-tear to fuel efficiency.

Rolls-Royce wanted to analyze that data to help reduce delays and fuel consumption.

“Aircraft and engines have gotten more talkative and the scope of our services has increased,” said Nick Farrant, senior vice president of Rolls-Royce, in a recently published case study. “There are terabytes of data coming from large aircraft fleets, with gigabytes per hour—rather than kilobytes—to process and analyze.” He added that “we and our customers are drowning in data, and many existing systems struggle to filter the signal from the noise and offer the means to analyze things in a consistent way.”

Rolls-Royce addressed these growing data analysis challenges by building a monitoring solution into its TotalCare Services, which oversee responsibility for engine reliability and maintenance. The company assumes all responsibilities for analyzing engine data in real time to manage customers’ engine maintenance and maximize aircraft availability.

To meet the technology requirements of this initiative, Rolls-Royce implemented Microsoft’s Azure IoT Suite to collect and aggregate data from disparate and geographically distributed sources. As documented by Microsoft, the types of data processed include:

In that respect, one area being explored is predictive maintenance. For example, aircraft and engine components, such as a fuel pump, often have a “soft life”—the point at which it is recommended to remove it for maintenance based on its time in operation. By analyzing detailed data from each specific pump and comparing it to data models and other pumps in the fleet, it is possible to provide an alert that indicates that a specific pump might not be performing well and should be replaced sooner than its soft life.

Aircraft fuel efficiency is another area being targeted. By analyzing new data against existing forecasts, reference tables, and historical trends, Rolls-Royce will be able to help airlines understand exactly which factors—including flight plans, equipment maintenance, weather, and discretionary fuel—have the most impact on fuel performance.

Rolls-Royce sees the ability to provide a wider swath of operational data as a way to expand its services to customers, the Microsoft case study reports. Being able to monitor and report aircraft engine components’ actual conditions could potentially add up to tremendous savings by minimizing the disruption and cost of maintenance. The company is also moving to solve different problems through machine learning and analytics.

Another benefit is that Rolls-Royce has gained a clearer understanding of how it should structure its support contracts, how it can better manage risk, and product development needs.