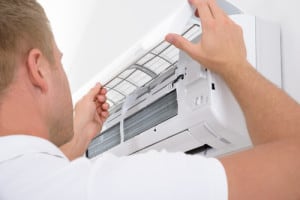 Korean tech rivals Samsung and LG are expected to make the new air conditioning units available by the end of January, just not in U.S. yet.

According to South Korean news agency Yonhap, Samsung and LG are planning to release smart cooling systems that use Artificial Intelligence. LG recently introduced its 2018 LG Whisen ThinQ air conditioner, and Samsung has a launch of their own planned for later this month.

“The Whisen ThinQ air conditioner has evolved to an air conditioner that can see, hear, think and speak,” said Song Dae-hyun, president of home appliance and air solutions at LG, “”The device can even understand a user saying ‘I am cold’ or ‘I am hot’ and then suggest whether to turn the air conditioner on or off,” a company official added during a launch event held at LG Twin Towers in Yeouido, Seoul.

See also: What is the role of standards, big data, and analytics in manufacturing?

LG claims the smart cooling devices are 30% more energy efficient, allow the user to check outside weather and pollution conditions, and can connect to popular home assistants such as Amazon Echo and Google Home. The company also said the new units will have deep learning capabilities.

Samsung, who made it clear during CES that their focus was on increasing their presence in IoT, said they will soon introduce upgraded versions of their wind-free air conditioners. The new devices will feature Bixby 2.0, which is moving from smartphones to smart appliances and will support the SmartThings IoT Hub.

Samsung explained at its CES booth that it envisions a powerful IoT platform for its customers, so it is rolling out its smart digital assistant to a variety of its devices. According to the tech giant, it wants its consumers to have control over its different products by just using Bixby to command and manage its hundreds of smart appliances and devices that are connected to its SmartThings platform, reported PressFrom in a recent article.

Neither company has mentioned pricing info or a U.S. release date.