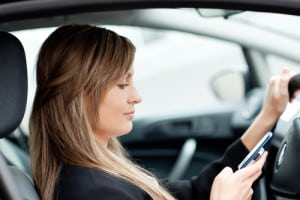 In the usage-based insurance market, smartphones are the promising new medium to earn rewards for safe driving.

Take a drive and you’re likely to see drivers found glued to their cell phones, obliviously chatting away, or checking Facebook while they take the important turns or move through a traffic light.

Such drivers not only put their own lives at risks, but jeopardize drivers and pedestrians in their path.

The National Highway Traffic Administration estimated 17,775 fatalities due to auto accidents in the first half of 2016. Out of these, more than two-fifths of the crashes are a direct result of on-road distractions while driving.

In the vast, global market for Internet-of-things (IoT) applications, usage-based insurance has already gained traction. Telematics data from a vehicle, for instance through an onboard device, can be combined with insurance industry data, with the result that aggressive or inattentive drivers might have to pay for bad driving habits through higher premiums, while safe driving habits are rewarded with lower premiums.

Smartphones have apparently emerged as a handy tool in the usage-based insurance market. On Dec. 8, 2016, TrueMotion announced the approval from both Pennsylvania Insurance Department and New Jersey Division of Insurance for its patented technological tool, the Distracted Driving Score.

Scott Griffith, the co-founder and chairman of TrueMotion said, “For the first time, insurers, and fleet operators can now partner with TrueMotion to measure, score and modify distracted driving behaviors.” He continued, “From insurers offering usage-based insurance, to the campaigns of wireless carriers and device manufacturers, to initiatives by the Federal Highway Administration and the National Safety Council, distracted driving is getting its due as the crisis that it has become.”

TrueMotion is touted as the first usage-based insurance score that has been devised to keep a track of the possible distraction that a driver might encounter out of emergency or sheer habit. This includes all activities that are carried out over a smartphone, such as making voice calls, use of applications, and text messaging. The core idea is to make drivers realize that there is a third eye which continuously keeps a watch on whether they drive safely. Based on this score, insurance providers will be able to award financial and service incentives to their customers depending upon their policies.

Under the TrueMotion product, the smartphone sensors accumulate data pertinent to the driver’s interaction with the smartphone. This data is analyzed to generate accurate driving scores. According to TrueMotion, data so far indicates that more than 75 percent of drivers notably reduced their smartphone usage while driving once they had downloaded the TrueMotion’ signature application.

In an early December press release, Verisk Insurance Solutions and Driveway Software announced their joint venture to bring smartphone telematics to vehicle manufacturers who had signed up for the Verisk Data Exchange. The proposed solution involves collecting data from the Driveway’s smartphone telematics platform and its own signature release of the Exchange.

The Verisk Data Exchange, a usage-base insurance product, was launched in July 2016, and saw active and willing participation from numerous owners of connected cars. Under the new collaboration, Driveway will build a smartphone-based platform for vehicle owners previously unable to leverage the benefits of usage-based insurance policies.

“Most original equipment manufacturers are implementing connected-car solutions in new vehicles,” said Jim Levendusky, the vice president of telematics at Verisk Insurance Solutions. “However, many vehicles without embedded connectivity cannot deliver a connected-car experience to their drivers. The Driveway/Verisk telematics smartphone solution will close this gap.”

The driver risk scores generated from the Verisk Data Exchange may be used by drivers to stage their responsible driving behavior and avail insurance discounts and offers.