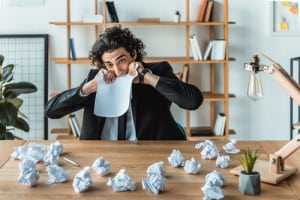 While a new world of technology has made the workplace more stressful with being “always on,” new tech is also helping to reduce those levels of stress.

Technology is often blamed as a new source of stress in peoples’ lives. A survey last year from the American Psychological Association concludes that stress runs higher, on average, for constant smartphone users than for those who do not engage with technology as frequently. The APA authors recommend a sort of “digital detox.” In the survey, almost two-thirds (65 percent) somewhat or strongly agree that periodically “unplugging” or taking a “digital detox” is important for their mental health. However, only 28 percent of those who say this actually report doing so.

In the workplace, people and processes are being overwhelmed by technology – which keeps evolving at a blinding clip – and growing mountains of data. Peter Thomson, writing in Global Focus, calls for a digital detox across technology-stressed workplaces.

“Digital technology was supposed to improve the way we work and increase productivity. But what has actually happened?” he asks, noting how “overall employee engagement levels are no higher than they were 10 years ago. US productivity since the launch of the iPhone has slowed, so the new tools and technologies we have at work are not making us more productive.”

See also: How wearables and real-time data are preventing fatigue-related accidents at work

Don’t blame technology for all this stress, Thomson adds. Blame the way work and organizations are managed. “The solution lies deeper within the business and it is something that has to be addressed at senior management levels,” he points out. ” We have created organizational cultures that encourage stressful work patterns.” Thomson urges that we “rethink how work is done. A high-performance culture is the result of recognizing that work is performed for a purpose.”

Well, appropriately enough, there is a technology solution for technology-induced stress. If business leaders seek a high-performance, satisfying work culture, perhaps they can put technology to work in a new way. As Eoin Whelan, Daniel McDuff, Rob Gleasure, and Jan vom Brocke write in a recent MIT Sloan Management Review article, a new generation of “emotion-sensing technologies and software fueled by artificial emotional intelligence” is capable of picking up, in real time, the points in the day or process when employees are incurring the greatest amounts of stress.

“Although we are still in the early days, research shows that these technologies, which read such things as eye movements, facial expressions, and skin conductance, can help employees make better decisions, improve concentration, and alleviate stress. While important privacy issues need to be addressed, the opportunities are significant.”

In a similar approach reported in MIT Technology Review, F1 drivers are getting biometric gloves that monitor drivers’ stress levels while racing. The gloves include a pulse oximetry sensor to measure heart rate and blood oxygen.

The Financial Impacts of Stress

For more traditional workplaces, Whelan and his co-authors describe the experience seen in ABN AMRO Bank N.V.’s trading rooms. “Research has shown that traders in heightened emotional states will overpay for assets and downplay risk, a condition known as ‘auction fever’ or ‘bidding frenzy.’ To address this problem, the financial services company implemented a tool called the Rationalizer, consisting of “a bracelet attached to the trader’s wrist that measures emotions via electrodermal activity (similar to the way a lie detector works) and a display showing the strength of the person’s emotions using light patterns and colors.”

The logic is that “when users become aware of their heightened emotional states, they are more likely to rethink their decisions. In addition to helping individuals improve performance, the aggregated data from such settings can help managers understand how internal and external environmental factors influence the risks taken by groups.”

There’s even a boredom sensor for workplaces that are a bit less frenzied than trading rooms. For example, “researchers at Telefónica I+D in Barcelona have developed an algorithm that analyzes smartphone activity for such signs. On the basis of a combination of data points — including how often users check their email, whether they log in to Instagram, whether they are adjusting their device settings, and how much battery power they consume — the algorithm correctly identifies user boredom more than 80% of the time. It can tell when employees use their phones to pass the time as opposed to pursuing specific goals.”

As one can imagine from this snooping smartphone example, tracking employees’ emotional responses in real time needs to approached delicately, with privacy concerns front and center, Whelan and his team explain. However, they observe, noting that many people are comfortable with smartwatches and fitness bracelets, and will even share the data produced from these devices on social media.

“The challenge will be to introduce new devices and measures into workplaces in a way that empowers performance, mitigates privacy concerns, and generally reassures employees that the benefits are mutual,” they conclude.