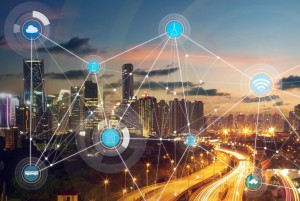 Frequency hopping spread spectrum tech, which is designed for ruggedness and reliable operation, is very compatible with almost any industrial IoT network.

The Internet of Things (IoT) has changed the way we view and use technology. As consumers, we have come to expect connectivity and access to information wherever we go. This has spread into many industries. As the Industrial Internet of Things (IIoT) rises, it is driving connectivity for all assets in an enterprise network. This is even true for the access layer – or the outermost edge of the enterprise network that we often see in remote, geographically dispersed locations where mission-critical sensors or devices reside.

Today’s IT decision makers are tasked with finding technology that connects all of these things together to provide a constant stream of data from the access layer back to the business office. As these decisions makers work to bridge the connection from the OT field network to the IT business office, they are inundated with technologies using a variety of different protocols and spectrums.

Anyone who is new to traditional OT networking technology may not be as familiar with the benefits of Frequency Hopping Spread Spectrum (FHSS) technology. Despite the rapidly changing technology landscape, it remains an optimal choice for long range communication in nearly any environment or location. Decision makers also may not be aware that FHSS can help alleviate some of the IT/OT convergence pain points and accommodate the growing number of sensors in the field. FHSS is rugged and reliable, and today’s options offer long range, high-speed, high-throughput options that are equipped to handle modern data needs.

Unfortunately, a number of myths continue to circulate around those who may not be familiar with the technologies’ benefits. Some of the most common myths involve security, saturation, range, compatibility, interference and obstruction. It is important to dispel these myths so that modern decision makers can add FHSS as a viable option in their communication network arsenal. By exploring each of these “myths,” this paper will provide clarifications and debunk some of the most common myths around FHSS.

In IIoT networks, such as those that provide data for Smart Cities, security is of utmost importance when it comes to selecting a communication link. Contrary to commonly held misperceptions, spread spectrum technology was designed with security in mind. Decision makers unfamiliar with its history should know that it was originally invented for the US Navy during World War II to prevent the Germans from ‘jamming” American radio transmissions for radio-guided torpedoes. The inventor of the frequency hopping radio was 1940’s movie star, Hedy Lamarr. The original radios contained a roll of paper, slotted like a player piano, to cause channel switching. Hedy’s friend, inventor/musician George Antheil, designed the first successful synchronization device to bring Hedy’s idea to fruition. In 1941, they received a US patent for the first “secret communications system” – their original system used 88 frequencies.

Not only was the technology designed to stay secure, but modern FHSS technology offers rapid frequency switching and additional layers of security. Modern switching is controlled by embedded software code that enables a radio to change frequencies up to 200 times per second, and use more than 100 channels.

Not only is it highly unlikely for signal jamming or interference with FHSS because of the rapid signal hopping, but many of today’s technology providers have added standards-based AES encryption as an extra layer of security. In networks where data needs to be transferred over long distances from the sensor back to the server – FHSS communications are actually a strong candidate from a security standpoint.

The sheer number of sensors being deployed today (some estimating this number to be in the billions over the next several years) equates to an increase of FHSS radios being used to transmit sensor data – especially from large, complex and geographically dispersed networks. When using an unlicensed spectrum for FHSS technologies, a common fear is that a “shared” frequency will become saturated and unusable as more companies and industries adopt it. However, if there is a saturation point, it has yet to be identified. In some areas, thousands of spread spectrum radios are successfully delivering data to multiple end users without conflict or data loss.

Over the years, considerable research and development went into making spread spectrum radio technology work in close proximity and share the same frequency band. To accomplish this goal, the radio networks are programmed to use separate frequencies. Each network is programmed to “hop” to a different frequency than other radio networks in the area. This hopping allows construction of distinct communication networks that don’t conflict with other nearby networks.

This is especially important and beneficial with the high volumes of data being pulled from different sensors today. When the network is properly programmed, the IT team does not have to worry about saturation points in the network that could prevent important data from being accessed.

When repeaters are factored into spread spectrum networks, long-range communication becomes possible. Unlicensed FHSS solutions are able to use multiple repeaters to extend range or improve coverage around obstacles. Some device manufacturers place no limits on the number of repeaters included in a single network and there are cases of 100 repeaters being used in the same network.

Spread spectrum technologies have the ability to operate as both a slave and a repeater simultaneously. This eliminates the need for multiple dedicated repeaters, and reduces installation costs. The radio can multitask as a slave unit at any RTU (remote terminal unit), EFM (electronic flow meter), or PLC (programmable logic controller), sending data back to the host, and as a repeater for other devices further down the network hierarchy.

If decision makers are looking for a rugged, long-range solution that is suitable for networks in almost any environment FHSS is a relevant option. Today there are also programmable, IIoT-ready options that offer long range, high-speed and high-throughput required for modern connectivity demands.

Many people believe that if they install a base of licensed radios, they must stay with the same manufacturer and model of radio they originally purchased. This is not true – it is possible to mix spread spectrum radios into an existing licensed radio system to take advantage of features such as multiple- repeater functionality. FHSS is specifically designed for ruggedness and reliable operation in any environment no matter how challenging. This makes it especially compatible for incorporating into just about any IIoT network, no matter what technology exists.

Additionally, today’s IIoT landscape is rapidly and constantly changing. Systems require more interoperability between disparate and oftentimes outdated technologies and systems. When looking at the needs of an IIoT network and the shift towards digital operations, technology needs have evolved. A decision maker often faces a legacy field communication network that needs to somehow tie into the modern IT system. FHSS technology can and does provide the necessary communication link that supports interoperability, as well as new technology and software solutions designed to bring all the disparate systems under a single toolchain.

As a new age of technology continues to expand and innovate, advancements such as programmability at the network’s edge are beginning to surface. This will introduce the ability to leverage third party applications at the Edge. These apps can enable anything form advanced data collection to enhanced cybersecurity and more. Modern FHSS solutions are designed with programmability in mind – in order to remain relevant as systems continue to evolve.

Another common myth is that spread spectrum and other radio systems will interfere with each other– especially in modern networks where there is a proliferation of devices in the field. This is simply untrue because spread spectrum technology is designed to expect interferences. One of the most common spread spectrum bands is 902-928 Megahertz. Many governments have set aside this band specifically for FHSS devices and the rules are structured to allow the band to be shared by multiple users.

The official designation for this band is ISM (Industrial, Scientific and Medical), because it was first reserved internationally for non-commercial use of RF electromagnetic fields. Some countries allow 902-928 MHz and also 2.4-2.483 GHz, while others allow one of these bands, but not the other.

Not only was the 900 MHz spectrum designed for multiple users, but when combined with the constant frequency hopping nature of FHSS, it is highly unlikely that the devices will interfere with each other. Another concern is that other devices – such as cellular technology will interfere with the 900 MHz spectrum. A “band pass filter” is a simple solution that will block any noise or interference that is outside the 902-928 MHz range.

In an IIoT network where real-time data is a top priority, it’s important for FHSS technology to avoid obstructions. There is a myth that spread spectrum radios are more restricted by line-of-sight (LOS) than other communications devices. The reality is that while line-of-sight is always preferred, spread spectrum radios can successfully pass data through obstacles such as buildings, trees, and even over hills to some lesser degree. Some FHSS radios are also ruggedized for performance in any challenging outdoor network or extreme weather condition.

A radio that can transmit 20 miles with clear line-of-sight, may not be able to do so if that path goes through a dense forest. The signal loss due to distance, in addition to signal loss or attenuation due to the forest, will be too great. While the radio can transmit through one or the other, the combination of the two may be too great to overcome.

Common terms for this degradation of signal are ‘path loss or “signal fade.” In outdoor applications, this can be computed using software that takes into account topography, frequency, antenna type, and signal output strength. In modern networks where the number of endpoints is dramatically increasing the distance between communications devices is getting smaller – this can help reduce attenuation. However, it’s more important than ever to obtain data from the access layer which is often remote. As a result, long-haul networks still need to be designed to account for LOS in order to most effectively get the data where it needs to go.

A common mistake of novice end-users is not performing a ‘path study” prior to starting installation. Performing a path study prior to starting a project will create a network design that takes every obstacle into account, and ensure a robust communications system, regardless of LOS limitations. While obstruction poses a challenge for FHSS, there are numerous solutions that can be incorporated after the path study.

The rapidly changing technology landscape has caused major shakeups in the way OT and IT networks operate. However, FHSS remains one of the most reliable and ruggedized option for modern IIoT communications. It has the range, speed and throughput necessary for collecting, monitoring and transporting important data from the access layer to the business office.

As decision makers work to overcome the challenges of adding and connecting sensors at every network endpoint, they must select technology that will optimize business operations. Modern FHSS technology is an ideal candidate for bridging the OT/IT divide. However, in order to recognize the value of FHSS technology, it is important to separate the myths from reality. From there it is possible to see the value of FHSS for networks now and in the future.

DDS vs OPC-UA: Which IoT standard to use?

Scott Allen is CMO of FreeWave, a company that specializes in the industrial IoT, M2M, and fog computing. Scott has more than 25 years of experience in product lifecycle management, product marketing, business development and technology deployment.