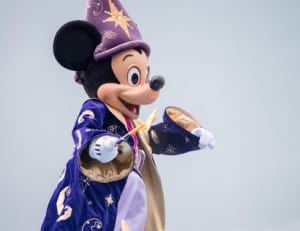 How a system of sensors and MagicBands reduced long waits and crowds at DisneyWorld, enabled automated services, and increased revenue per guest.

In the mid 2000s, The Walt Disney Company was challenged with slackening interest and rising complaints about congestion in its global theme parks. Customers encountered long lines and crowds, an inevitable result of 10,000 visitors entering a park such as DisneyWorld each hour at peak times. The company needed to look at new strategies and employ technology that will help provide visitors more pleasurable experiences at their parks, while acting on more specific needs and requirements.

Disney put into place a technology platform that would track guests movements in real time, enabling the delivery of services and experiences when and where required. The program, called MyMagic+, includes RFID-enabled MagicBands, which are wearable computing devices that integrate payments, hotel room access, ticketing, FastPass, and tracking of guests’ locations. The technology is based on radio systems, online services and mobile apps. MyMagic+ consists of four main components: MagicBands, FastPass+, My Disney Experience, and PhotoPass Memory Maker. MyMagic+ is part of the company’s “Next Generation Experience” project.

MyMagic+ is a reportedly $1 billion program at the company’s DisneyWorld park in Orlando, Florida. The MagicBand wristband lets customers access services such as park entry, purchases of souvenirs and food, and pushing strollers through turnstiles without the need for paper tickets.

Disney’s MyMagic+ initiative rolled out to all 30 million annual visitors in March 2014, and about one-third took advantage of the MagicBand wristbands in its first year, according to a report issued by TCS. According to the report, those who use the bands spend more than the average guest, though specific numbers were not revealed.

To implement the MyMagic+ and MagicBand system, Disney had to redesign the infrastructure of its parks, which dated back several decades. The parks lacked WiFi access as week as other communications technologies. This was challenging, since the parks needed to remain open. In addition, as noted by FastCompany’s Austin Carr, “more than 28,000 hotel doors needed their locks replaced in order to connect wirelessly with the MagicBand, even as some 80% of the rooms at Disney’s resorts, on average, were occupied.”

Today, MagicBands (with an RFID chip and a radio transmitter) transmit to thousands of radio receivers in the park, TCS reports. For example, in restaurants, food can be ordered in advance. The wristbands arrive in the mail after visitors book their trips online. “Customers who sign up for an express service find the bands can be used to get on an airport shuttle to the park, check into the hotel, and so on.”

DisneyWorld now has numerous sensors placed throughout which tracks visitors in real time. Digital sensors at the parks’ entrances scan guests’ MagicBands as they enter the premises, serving as an alternative to the formerly clogged ticket lanes. The real-time sensors, analyzing data from the MagicBands, has helped Disney staff better react to crowding situations, to distribute the flow of customers through the park, kicking off spontaneous diversions such as character parades, FastCompany’s Carr reports. “This kind of traffic management wouldn’t just be a service to ­customers—it could also help Disney fit more guests inside its parks.”

The data coming in from MyMagic+ helps Disney staff deliver personalized service and interact with guests, including awareness of their birthdays. One of the first features to be launched was interactive service in DisneyWorld’s Be Our Guest restaurant. “Guests who preordered food online, or at a restaurant kiosk, could sit down and have their meal arrive automatically, thanks to sensors telling the wait staff to deliver what food to what table,” according to Carr. Guests can pay for various amenities across the park with a flick of their wrists. Lines at park entrances have been significantly reduced, with MagicBand cutting turnstile transaction time by 30 percent. Guests with MagicBands can also interact with exhibits, such as designing their own virtual autos at Epcot’s Test Track.

The data collected in real time from MagicBands has helped boost visitor satisfaction with their experiences at DisneyWorld. While the MagicBands are popular, it’s uncertain how long their use will extend into the future, as Disney contemplates moving many features to smartphones, FastCompany’s Carr reports. Either way, real-time data will continue to be a part of ensuring a positive customer experience.

Frontiers in Artificial Intelligence for the IoT: White Paper
Beyond Sensors: IBM on Use Cases for Real-Time Data
Why Data Integration Needs to Evolve for the IoT
Real-Time Traffic Management With Road Signs