Home / Internet of Things / What’s Up with the IoT and Drones? 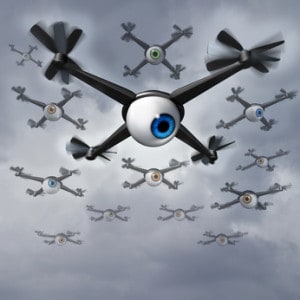 I’ve been flying model aircraft for the last 15 years. It’s a common hobby for geeks, and a challenge to build something that can take off and land, all controlled from the ground. Over the years, I’ve watched radio-controlled aircraft—like other technologies—improve a great deal. Computerized flight systems don’t require the skill that is needed to fly models. I’ve also seen the introduction of what are called multirotor aircraft (most commonly referred to as “drones”).

Drones have made the news lately because of their ability to fly in fairly tight spaces, carrying cameras or dangerous payloads. With all of these camera-equipped drones flying in the sky, the public has been freaking out a bit over privacy concerns. The FAA has also been concerned about the potential damage that drones can cause to people and property.

The rise of drones has not escaped the commercial world. Back in 2013, Amazon stated that it wanted to leverage drones to deliver packages in record time. The government has been leveraging drones—radio-controlled and autonomous—for years. Of course, there are thousands of people out there who leverage drones for aerial photography applications. The movie and TV industries find drones to be a cheap way to get some amazing shots without renting a full-sized helicopter.

So, what’s a drone? A drone is an object that has a computer and is connected to some device that allows it to be controlled by a human. However, drones don’t need to be controlled from the ground; they can be programmed to carry out tasks, flying themselves by using guidance from their internal systems. Also, drones can be controlled by remote computers, receiving instructions to carry out tasks that have a number of commercial applications (such as agriculture and physical security).

Thus, drones are a “killer” Internet of Things (IoT) technology and we’re just trying to figure out its value. The ability to have drones controlled by remote, perhaps cloud-based systems brings up all sorts of cool ideas for their application. Any time something needs to be observed, or items need to be delivered, inexpensive drones could do that job.

What’s more, the data-gathering potential of these devices is huge. The ability to fly over crops, houses and cities make them the perfect platform to gather data that was once too expensive to gather. Indeed, you can count on the local tax assessor to use this technology to spot unreported pools, boats and other items that can be taxed in backyards. Yes, drones do have a downside.

What’s important here is that we understand the potential of this technology. This includes what’s practical and safe versus what’s a bit “out there.” I don’t think that Amazon will have drones flying down the street anytime soon but I do think that we’ll see more applications in surveillance including agriculture and search and rescue. I’m sure we’ll see a few of them spying on our neighbors, perhaps spying on us. You have to take the good with the bad.