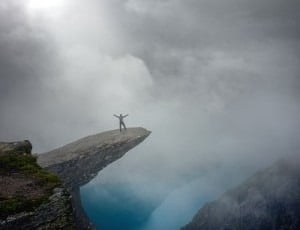 A look at how fog extends edge computing functionality in IoT and 5G ecosystems — and how it bridges the gap between the cloud and what needs to be analyzed locally.

The role of fog computing as the necessary architecture to enable IoT, 5G and embedded AI is getting clearer, but questions remain about the linkage between fog and edge.  The bottom line: Fog and edge are synergistic.

Fog is superset of Edge Computing.

At the OpenFog Consortium, we describe fog computing as bridging the continuum from cloud to things.  It’s a continuum because fog overlaps cloud and things and fills the computing gap in between.  Fog provides the missing link in what data needs to be pushed to the cloud, and what should be analyzed locally – at the edge.  In the IT and IoT food chain, we describe it as edge is to fog, as apple is to fruit.

Although there is some overlap, a clear understanding of the relationship between fog and edge is necessary to design functional, efficient IoT and 5G architectures and to enable their productivity.  In that spirit, here are 10 ways that fog architecture leverages and extends edge capabilities:

Although there is some overlap, a clear understanding of the relationship between fog and edge is necessary to design functional, efficient IoT and 5G architectures and to enable their productivity.  In that spirit, here are 10 ways that fog architecture leverages and extends edge capabilities: 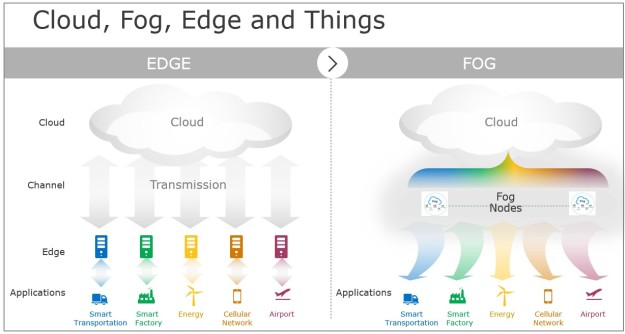 Side by side view of edge and fog architectures. Edge runs specific applications in a fixed logic location and provides a direct transmission service without data analysis. Fog works with edge to run applications in a multi-layer architecture that decouples and meshes the hardware and software functions, allowing for configuring / reconfiguring for different applications while performing intelligent transmission services with computing/storage/communication capabilities along the cloud to things continuum.

Why does this matter?

It’s clear that edge and fog are complementary.  It is time for us to move the conversation from “how are they different”to “how should they work together” to enable advancements in industry

For fog architects, the answer lies in where, when and how to distribute computation, communication, control and storage along the continuum from cloud to things – not only at the edge but from where data is generated to where communications, decisions, monitoring and actions take place.

At the OpenFog Consortium, our technical working groups are addressing all aspects of this continuum. The OpenFog Reference Architecture (RA), released in February 2017, provides an overview of system architectures for fog nodes and networks, and lends insight into fog-edge collaboration.

Our goal is to enable all of the architectural benefits of the cloud and to leverage the superset of elements in the fog continuum. If an implementation is run on pure edge, it may be reliant to a commodity gateway market.  Fog architecture opens up a much richer architectural canvas:  It’s an architecture that potentially can extend hardware and software leaderships well into the future of IoT and 5G.

The OpenFog Consortium is a global nonprofit formed to accelerate the adoption of fog computing in order to solve the bandwidth, latency, communications and security challenges associated with IoT, 5G and artificial intelligence. It’s work is centered around creating a framework for efficient and reliable networks and intelligent endpoints combined with identifiable, secure, and privacy-friendly information flows in the Cloud-to-Things continuum based on open standard technologies. For more information, please email [email protected]