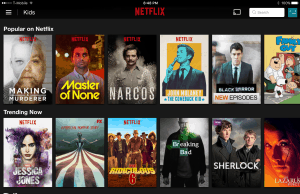 Every recommended video you see on Netflix was selected by an algorithm. The company estimates its algorithms produce $1 billion a year in value from customer retention.

When intuition fails, data from machine learning can win, according to a recent paper describing Netflix’s  recommendations system.

On a Netflix screen, a user is presented with about 40 rows of video categories, with each row containing up to 75 videos, according to the paper, which was published in the Dec. 2015 issue of ACM Transactions on Management Information Systems (TMIS).

While one would think such a large selection would keep viewers browsing, too much choice can be counterproductive. Typically a viewer loses interest after perhaps 60 to 90 seconds of trying to find a video to watch, write authors Carlos A. Gomez-Uribe and Neil Hunt of Netflix. Like any digital business, or even a supermarket with rows of breakfast cereal, Netflix has little time to catch the customer’s attention.

Historically, Netflix relied heavily on customer ratings of videos when shipping DVDs by mail. Now Netflix has access to a much broader set of data—what each member watches, when they watch, the place on the Netflix screen the customer found the video, recommendations the customer didn’t choose, and the popularity of videos in the catalog.

All of this data gets fed into several algorithms powered by statistical and machine-learning techniques. Approaches use both supervised (classification, regression) and unsupervised (dimensionality reduction through clustering or compression) approaches, according to the authors.

A video-to-video similarity algorithm, or Sims, makes recommendations in the “Because You Watched” row. A personalized video ranker algorithm, or PVR, selects the order of videos in genre rows, using an arbitrary subset of the Netflix catalog. As Gomez-Uribe told Wired, “The closer to the first position on a row a title is, the more likely it will get played.” But PVR works better when it’s mixed with “unpersonalized popularity,” he and Hunt wrote in their paper.

As an example, the authors describe recommendations for shows similar to “House of Cards.” While one might think that political or business dramas such as “The West Wing” or “Mad Men” would increase customer engagement, it turns out that popular but outside-of-genre titles such as “Parks and Recreation” and “Orange Is the New Black” fared better. The authors call this a case of “intuition failure.”

Another algorithm is the “Top N ranker,” which makes recommendations in the “Top Picks” row. A “Trending Now” row uses short-term trends, such as an interest in holiday movies or films driven by weather events. These short-term trends are “powerful predictors of videos that our members will watch, especially when combined with the right dose of personalization,” the authors write.

The authors write that over the years, the recommendation system has decreased customer churn by several percentage points and saves the company about $1 billion a year.

Personalized content also helps “find an audience even for relatively niche videos that would not make sense for broadcast TV models because their audiences would be too small to support significant advertising revenue, or to occupy a broadcast or cable channel time slot,” according to the paper. “This is very evident in our data, which show that our recommender system spreads viewing across many more videos much more evenly than would an unpersonalized system.”

The paper also describes how Netflix uses “evidence” algorithms, which focus on what information to show a viewer about a movie (such as whether it won an Oscar); search algorithms; how Netflix performs A/B testing on its algorithms, and opportunities for improvement in testing. A copy of the paper can be found here.