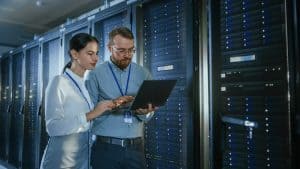 AI will help NetOps keep ahead of changes and help them to lead others through them.

As artificial intelligence (AI) becomes accessible to everyone, Network Operations staff could get distracted from their own valuable projects to rescue everyone else’s. Who could blame them. Everyone is talking about AI these days. It’s being misrepresented in writing, exaggerated on TV, and woefully misdirected in the movies. Still, as publicists might say, the only thing worse than being talked about is not being talked about.

All that energy and enthusiasm could help with the acceptance and mass adoption of the concept, which is positive because this is a technology that has the potential to make the world better for everyone. Whether it does is another matter.

It’s the misunderstandings that are going to be dangerous because it will be the Network Operations (NetOps) staff that selflessly serve the business, making everyone more productive.

However, they should make time to improve their own working lives because there are so many tasks in their life that could be automated. For that, they need the time and opportunity to analyze and code the predictable aspects of their own jobs – which frees them to concentrate on showing how valuable they really are. It’s hard to impress the board when you’re in the engine room fighting fires.

One of the challenges for operations staff is The Engineer’s Curse. The better they are at their job – making other people’s work easy – the more they are taken for granted. People drawn to this profession are not natural self-promoters and don’t relish office politics because they are instinctively empathetic. The craft they hone is to hide the complexity and create simple interfaces. They work so hard to make the job look easy, then get taken for granted as a result! One has to be a good listener to give good service, and that is a habit that instills an instinctive tendency to put the needs of others first.

In other words, AI could improve many working lives. But NetOps must first make sure they make time to improve their workdays, too.

So what are the dangers?

Consider how the enterprise is evolving in response to modern conditions. Take, for example, the type of company that knows it must change but has been putting off the painful transformation. A major book publisher is a prime example because culturally, they are old world, no matter how up to date their ERP is. They have long been aware of the benefits of home working, but only the incidence of COVID has forced them to make the jump. Now the main offices in town may have whole wings that can be taken out of the network.

These transitions to mass remote working aren’t always seamless. The staff at home are being baited by phishing expeditions, and their unprotected devices will be hijack targets for the ransom wary criminals who do know a lot about Denial of Service attacks. The fall out will eventually settle on the poor NetOps staff.

This has a negative impact on business continuity and company morale. The confusion over how processes and lines of command have been affected is unsettling. Nobody knows who to call if the link in the chain is broken.

This is a typical example of the circumstances where many companies might turn to AI in desperation to relieve their workload. However, they would be using it as a response, a defense mechanism, when they should really be using it proactively. Consider the range of AI-powered automation options available to the enterprise.

For the networking operator, some sort of ‘digital delegate’ (DD) would be useful if it could take care of the predictable parts of the network’s life cycle. That’s a delegate as in one who ‘attends to or communicates the ideas and actions of others.’

Instead of reacting to alerts, networking staff could delegate some of the more predictable fixes to automation. Eventually, through processes such as machine learning, their DD would know to re-configure any troublesome devices and even connect and run services. Anyone whose workload includes fixing communications glitches could save a lot of time if they could create problem-solving policies.

This sort of pre-emptive action, which obviates many alerts before they get elevated into problems, makes a huge difference to the morale and esteem of the Networking Operator because it saves them the needless hassle.

If they had time, they could then present a report to the board, make their recommendations, and influence policy before the company institutes those changes would later prove expensive. NetOps could, for example, advise the decision-makers before they tell people to work from home without having warned them of the security dangers. This is just one example where NetOps could save the company a fortune.

This illustrates the crucial difference between the defensive use of AI and strategic deployment by the NetOps staff.

A network operator who finds themselves installing a virtual assistant as their first AI automation will probably always find themselves ‘chasing the game’ when they should be dictating the play.

We are talking about general rules for very complex situations here, but the point is simple. In general, AI rules the network but runs after the employees.

If AI, as is predicted, creates a major ground shift, then the NetOps people know the landscape best. They know every process in the company and, figuratively speaking, they know where all the bodies are buried!

Nobody can predict the future, but we can say that with some confidence that AI will help NetOps work smarter, keep them ahead of the changes and help them to lead others through them.

However, that will never happen if they end up being called in to make ad hoc reactions to every network alert that’s generated. It would serve nobody well if the networking engineers and support staff helped everyone on the boat but missed it themselves.

If you work in NetOps, it’s time to ask yourself: are you going to watch the greatest show on earth or direct it?

Kevin Deierling, VP of Marketing, NVIDIA networking business unit. He has served as Mellanox’s VP of marketing since March 2013. (Mellanox was acquired by NVIDIA in April 2020.) Previously, he served as VP of technology at Genia Technologies, chief architect at Silver Spring Networks and ran marketing and business development at Spans Logic. Kevin has contributed to multiple technology standards and has over 25 patents in areas including wireless communications, error correction, security, video compression, and DNA sequencing. He is a contributing author of a text on BiCmos design. Kevin holds a BA in Solid State Physics from UC Berkeley.