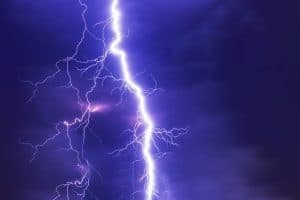 Enabling communities to know about lightning strikes coming in the next 10 to 30 minutes may give them time to avoid fatalities or damage.

Lightning storms may be captivating to watch, but every year hundreds of people lose their lives to strikes. Despite this, there hasn’t been much research conducted to better predict where lightning will strike next, and how substantial it will be.

At the École Polytechnique Fédérale de Lausanne’s (EPFL) School of Engineering in Switzerland, researchers have been working on a system to better predict lightning strikes. The team, led by Farhad Rachidi, embedded artificial intelligence into a meteorological database, spanning ten years, to make accurate predictions within a 30km radius.

SEE ALSO: How AI is Empowering the Internet Networks of Tomorrow

The team built the system by feeding the AI real-time data on atmospheric pressure, air temperature, humidity and wind speed and gauging it against the meteorological database.

In early tests, the system predicted a storm correctly 80 percent of the time.

As seen in an infographic by Swissinfo, lightning strikes are a serious natural hazard in Switzerland, especially in the North West, which sees a lot of wind and flooding as well.

“Current systems are slow and very complex, and they require expensive external data acquired by radar or satellite,” said Amirhossein Mostajabi, a Ph.D. student at EPFL. “Our method uses data that can be obtained from any weather station. That means we can cover remote regions that are out of radar and satellite range and where communication networks are unavailable.”

By enabling communities to know about lightning strikes coming in the next 10 to 30 minutes – and the severity of the storm – it may give them time to avoid fatalities or damage. It may also give airports a better understanding of whether or not to take off.