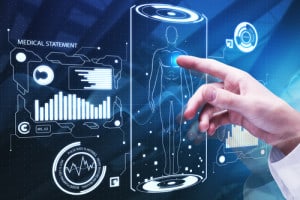 Wearables, implantables and other AI- enabled IoT tech show much promise for making healthcare treatments more preventative than reactive in the future.

A few years ago at a conference, I heard a Gartner analyst describe this scenario from a not-too-distant future: you’re walking down the street, and an ambulance suddenly pulls up alongside you. “Get in,” they say, “you’re about to have a heart attack.”

While it may be some time before predictive technologies fuse this closely with the emergency care infrastructure, the rise of wearable or implantable sensors, streaming data in real time to cognitive systems, shows a great deal of promise for making healthcare treatments more preventative than reactive.

Increasingly, healthcare services are being provided by systems and machines as much as they are by humans. Powered by artificial intelligence and analytics, these systems may be capable of delivering diagnoses faster than their human counterparts – and deliver predictions as well.

A recent PwC survey of healthcare executives finds 31% see AI as the most disruptive technology in their industry, followed by the Internet of Things (27%).

To some observers, AI is “the stethoscope of the 21st century,” as relayed by Abby Norman in a recent Futurism article. AI is “already just as capable as (if not more capable than) doctors in diagnosing patients,” Norman says. In one case, an AI diagnostics system is “more accurate than doctors at diagnosing heart disease, at least 80 percent of the time.” AI-based systems are also demonstrating the ability to detect blood infections and colon cancer.

AI also provides on-target predictions as well. Norman describes how one study of a system that ran data on 378,256 patients “predicted 7.6 percent more cardiovascular events in patients than the current standard of care” – which translates to “355 additional patients whose lives could have been saved.”

In his analysis, PwC’s Williams cautions that AI technologies won’t be adopted overnight – it’s going to take some time. The massive amounts of data streaming in may end up sitting unused in storage systems, and “clinicians and payers will have to make hefty investments in AI-enabled devices, which will require their conviction that the new tech will in fact improve care and reduce costs long-term. From EHRs to streamlined coding, providers and payers are currently under an enormous amount of pressure to balance multiple IT investments. Convincing them that costly AI-enabled tech will be worth their investment will require compelling proof.”

Other issues may also get in the way of AI-delivered healthcare, starting with liability (“can a patient sue a robot for malpractice?”) and biases built into these systems.