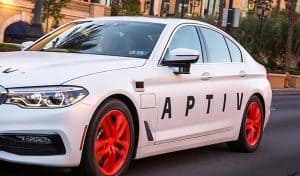 Aptiv sees Wind River’s edge computing software as a critical platform for automotive in the next decade.

The agreement comes four years after Intel sold the division to TPG for an undisclosed amount.

Wind River is one of the largest suppliers of real-time operating systems (RTOS) and is a key supplier in the defence and aerospace industry. It has 1,700 customers globally, which utilize over two billion edge devices.

Aptiv sees Wind River’s edge computing software as a critical platform for automotive in the next decade, as cars are outfitted with software such as self-driving capabilities and sophisticated infotainment systems.

“The automotive industry is undergoing its largest transformation in over a century, as connected, software-defined vehicles increasingly become critical elements of the broader intelligent ecosystem,” said Kevin Clark, president and chief executive officer of Aptiv.

“Fully capitalizing on this opportunity requires comprehensive solutions that enable software to be developed faster, deployed seamlessly and optimized throughout the vehicle lifecycle by leveraging data-driven insights. These same needs are driving the growth of the intelligent edge across multiple end markets.

“With Aptiv and Wind River’s synergistic technologies and decades of experience delivering safety-critical systems, we will accelerate this journey to a software-defined future of the automotive industry.”

As part of the acquisition, Aptiv will incorporate Wind River Studio into its SVA platform, but the subsidiary will remain independent of Aptiv.

During Intel’s ownership between 2009 and 2018, Wind River worked under Intel’s Internet of Things group. After the TPG acquisition, ex-CEO Jim Douglas said that Intel “hamstrung” the company’s growth by not allowing it to work with other silicon companies. Intel acquired Wind River in 2009 for $884 million.

“Wind River has established itself as a worldwide leader in cloud-native, intelligent edge software that delivers the highest levels of security, safety, reliability and performance,” said Kevin Dallas, president and chief executive officer of Wind River.

“Combining Wind River’s industry-leading software, customer base and talent with Aptiv’s complementary technologies, global resources and scale will realize our vision of the new machine economy. Together we will accelerate the digital transformation of our customers across industries through best-in-class intelligent systems software.”

Wind River generated approximately $400 million revenue in 2021, according to a press release. In 2009, before it was acquired by Intel, it reported $359 million annualized revenue.