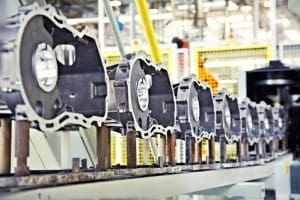 Ericsson’s IoT-enabled devices and networks provide real-time management of its factories. across the globe.

Opportunity or challenge encountered:  Ericsson, a telecommunications equipment manufacturer, has factories across the globe now using smart manufacturing technologies such as robotics that self-configure, intelligence in a private cloud, augmented reality for quicker, accurate testing, digital twins for design, simulation and planning, autonomous guided vehicles for faster material handling, and real-time tracking of workers and moving assets for safety and optimization. To make this all work in a productive fashion, connectivity is critical. The company estimates that its smart factories will need to connect one device per two square meters, as it seeks to harness the potential of the latest generation of smart factory technologies.

Meeting the challenge:  Ericsson sought to manage the multiple technologies and devices within smart factories with a single communication platform serving a private cloud-based management system. Such a system needs to provide a complete plant overview and aggregate intelligence from all areas, according to a case study from GMSA. The company built a system employing mobile IoT and other cellular networks to collect data and analytics being fed to the centralized platform. “Ericsson believes the most suitable wireless technology for industrial use is cellular, as it offers a higher level of reliability and security than alternatives and can support a higher density of devices. Cellular systems are designed to only admit and manage trusted identities and data in the network and are based on global 3GPP standards with strong security mechanisms.”

The company added sensors with NB-IoT connectivity to workstations on its manufacturing lines to enable real-time monitoring and analysis of production data, which can then be used to guide dynamic adjustments to the production plan. A wireless system enables machine operators on Ericsson’s production lines to call for technical support when a quality problem occurs. Historically, this has been an inflexible wireline system in which the shift leader got the call on his or her screen and then had to manually find the right engineer to address the problem. The new mobile IoT system makes calls directly to the right engineers from the line, reducing lead-time for problem-solving.

Ericsson is also using NB-IoT-enabled sensors to track equipment that has been moved. As a result, key assets can now be located immediately, while paperwork is reduced and there is less risk of important equipment going missing. The cellular-based connectivity also enables fast and cost-efficient production line changes, as well as integration and optimization of contributing workflows.

Ericsson’s IoT network is even helping employee at its radio equipment plant in Nanjing, China keep track of tools, GSMA reports. The plant employs high-precision screwdrivers that cost US$1,500 each, requiring routine calibration and lubrication based on utilization times. Previously, this maintenance was a manual procedure performed periodically and documented in handwritten logs.

The high-precision screwdrivers have now been fitted with real-time motion sensors attached to NB-IoT modules, the case study relates. Every eight hours, the modules transmit about 100 bytes of data indicating how much they have been used in the preceding period. The data is then captured in Ericsson’s private cloud, which makes automatic calculations and analysis of the tools’ utilization and condition status. The cloud-based quality-monitoring system also indicates when certain thresholds are reached, enabling predictive maintenance that extends the service life of these expensive screwdrivers.

Benefits:  For Ericsson, mobile IoT connectivity has several key advantages over alternatives, GSMA explains. Whereas Ericsson estimates cables, which are prone to connector failures, can cost up to $230 per meter to install and maintain, wireless sensors are simple to retrofit to existing industrial equipment, with a lifetime of up to 30 years. The mobile IoT system yields potential savings of approximately $230 per added sensor when adding a simple sensor to the shop floor. The wide bandwidth, consistently low latency and ultra-reliability offered by 5G connectivity are helping the factories achieve high levels of automation.