Home / Analytics / Industrial IoT Gets Ever Smarter With an AI Assist 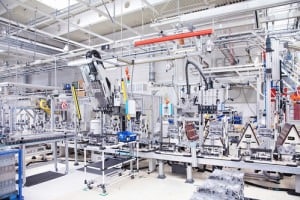 Like many sectors and areas of tech, industrial IoT is also riding the wave of artificial intelligence-driven innovation.

What a difference a couple of years makes. Not too long ago, the industrial Internet of Things was about connecting to various production systems or embedded sensors and enabling them to talk to centralized control centers or servers. Now, industrial IoT is rapidly becoming the ultimate platform for artificial intelligence.

The evolution of IIoT from just a bunch of nodes into a highly intelligent interconnected mesh was recently documented by Bernd Gross, SVP of IoT and cloud for Software AG, and founder of Cumulosity, acquired by Software AG in 2017.

See also: Horizontal or vertical – what kind of IIoT business are you?

Gross, speaking at Software AG’s announcement of its acquisition of TrendMiner, which provides visual data analytics for production systems, notes that the industry has undergone a fundamental shift over the six years since he first launched Cumulosity, an IoT platform. “It’s not the same IoT six years later,” he says. “The market is shifting, very fast, into a new dimension — it’s shifting into real-time and artificial intelligence.”

In the first wave of IoT, “the main requirement for our customers was condition mode,” he explains. “What is my condition? Is it working or not? Are the power meters okay? Is the fill level enough? It was very simple condition monitoring alarm management.” These initial efforts tended to be standalone projects, not tied into any core enterprise applications, he adds.

In the next phase of IoT, there was “an enormous shift toward real-time analytics and real-time management,” he continues. This, in turn, spurred greater integration with enterprise systems. “The first phase was historical analytics,” Gross says. “The second phase has been real time.”

Now, IoT’s third phase employs artificial intelligence to deliver data to make predictions of future events across production systems and supply chains, Gross says. Accordingly, with both Cumuloisty and TrendMiner, he laid out his vision for Software AG, to be “the Facebook for artificial intelligence for machines, the IoT. We have a lot of data, and we can use the data to start predicting.”

TrendMiner enables manufacturing companies and the process industries to recognize patterns and trends in their process data, identify production irregularities, and adapt any necessary process adjustments early – without the need for support from IT specialists or data scientists. The solution collects and provides analysis on time series data that emanates from machines, compressors, pumps and other systems, enabling users to spot anomalies in production systems performance,  as well as provide predictions on future performance.