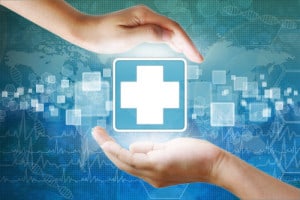 While advances in cognitive computing in medicine are growing, some healthcare stakeholders worry about machines replacing doctors. Is this fear founded?

Doctors command a lot of respect in our society, and for good reason. They have the massive responsibility of keeping us healthy amid the tens of thousands of human illnesses that are out to get us. They’re not perfect, not by a long shot—they are only human, after all. They’ve always done the best they can, but with new advances in artificial intelligence like cognitive computing, they have more tools than ever at their disposal to save lives and reduce errors.

Most people are thrilled by opportunities for cognitive computing in medicine, but some are getting worried that machines will start to replace doctors in the near future. Is this likely to happen, or is it just needless worrying? Will cognitive computing assist doctors and medical staff, or replace them altogether? Let’s take a look at what we know so far.

Cognitive Computing: What is It?

Cognitive computing falls under the category of artificial intelligence, but it is a separate sub-category of this broader umbrella. In a nutshell, the term describes a computer that can “think” like the human brain. Using deep learning, natural language processing, interactivity, and context, supercomputers with cognitive systems can learn and adapt, solving complex problems that computers have historically been incapable of processing. IBM is the leader in cognitive computing with their Watson technology, and the company is working hard to make cognitive computing accessible to organizations in a variety of industries. This technology has massive potential in many different industries, but IBM has been putting the focus on the healthcare industry since there are so many areas for improvement.

Data has made its way into nearly every industry, but we’re only now just beginning to harness the power of cognitive computing in healthcare due to the recent widespread use of electronic health records (EHR). By 2015, 96% of hospitals were using certified EHRs, and this new availability of comprehensive patient data is contributing to the rise of personalized and integrative care, which adapts to the needs of the individual patient. With data flooding into healthcare organizations, cognitive systems are needed to make sense of it all.

What is cognitive computing’s biggest role in the healthcare system? Improving care by giving doctors context-based suggestions for treating individual patients. The system uses the data relating to a patient’s case and makes suggestions with a confidence level assigned to it, helping doctors diagnose and decide on treatment. This could include analysis of data from a variety of sources: the patient’s records, published research and case studies, and even data from the more than 165,000 mobile health applications available to patients.

In addition to simply gathering, processing and storing data, cognitive computers can gain insights from that data at a much larger scale than the human brain. Our brains have the ability to process complex information, but we can’t access a large database at will to help with that problem-solving. Think about it: if you’re a doctor trying to diagnose a rare condition, you might have to spend weeks looking through your medical library or an online database for what you’re looking for—a computer can find it almost instantly with the right search query.

A cognitive computer combines the best of both worlds: it can use humanlike context and computational data processing to find exactly what the doctor was looking for. In situations where time is of the essence, the quick diagnosis could save patients’ lives, improve diagnostics, remove practice barriers and expand quality of care.

Watson has already been implemented at the MD Anderson Cancer Center where complex and individual mutations make treatment difficult. Researchers have found that the supercomputer’s success rates are generally very high, and improve as the system learns.

Aside from more effective diagnoses and treatment, cognitive computing offers patients other benefits. Although doctors are very intelligent and do their best to give their patients excellent care, the error rate in medicine is shockingly high. A Johns Hopkins study revealed that over 250,000 Americans die from medical errors each year, making them the third most common cause of death in the United States. That doesn’t even take into account errors that don’t cause death but do harm patients.

While technology can’t prevent all medical errors, cognitive computing can potentially cut down on the number that occur, saving lives and protecting hospitals. Patients can feel more confident that they have all the options for treatment laid out, based on a huge volume of data.

So is a doctor even needed with Dr. Watson in the room? Good news for medical students: Watson isn’t taking your job—at least for now. Cognitive computers lack the creativity of human beings, and aren’t intended to take the personal touch out of medicine.

According to IBM, their cognitive computing systems aren’t meant to eliminate doctors—just make them more effective and efficient. Automation is nothing new. The industrial revolution streamlined and changed manufacturing forever, but new jobs emerged to replace the old. Medicine is fairly difficult to automate, and it will be a long time before doctors have to start worrying. Estimates show that less than 30% of a nurse’s job can be automated, and healthcare overall is likely to stay assisted by technology, rather than replaced by it in coming years. Artificial intelligence research continues at a rapid pace, however, and it’s hard to predict which jobs might be eliminated in the future as supercomputers get smarter and smarter.