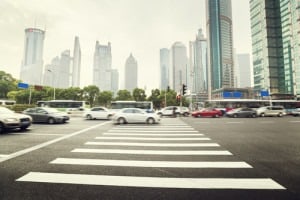 Connected car technology is most often associated with countries such as Germany and Japan, but what happens when China wants in?

Connected car technology is most often associated with countries such as Germany and Japan, but what happens when a country does not fit this model?  Is there a country with technology firms that may be little known outside Asia but are some of the biggest in the world? A country that is economically poorer per capita than other markets such as France and Korea but will greatly influence them with the largest car market in the world? There is one such country, and that country is the People’s Republic of China (PRC).

Anyone who ignores the Middle Kingdom is likely to misunderstand how the future will unfold.

The Chinese automobile industry looks very different from most other national industries. After decades of lagging behind, China now makes more cars than any other country in the world. In 2015 the PRC produced 24,503,326 cars, far more than America’s 12 million vehicles (only a third of which are passenger cars). However, it does not yet have any major car manufacturers (OEMs) that resemble major OEMs such as Citroën and Tata Motors or juggernauts such as Toyota, Ford, or Daimler. There are more than 100 licensed OEMs in the People’s Republic. Six of the largest are state-owned enterprises (SOEs) and many others are also bolstered by the provinces and cities that are eager to become new centers of car manufacturing.

The Chinese are learning international techniques in manufacturing through joint ventures with international OEMs and Geely’s ownership of Volvo. The six largest SOEs and their respective joint ventures make around ¾ of the cars produced in China and could thus form the nuclei of a Chinese oligopoly similar to the Detroit Big Three as well as their German and Japanese counterparts. However, attempts to consolidate the OEMs and their smaller cousins have been stymied by local opposition.

Even the centrally-owned SOEs cannot merge due to intragovernmental fights.  This is unlikely to change anytime soon because Chinese automobile customers currently have low levels of brand loyalty.

It is unclear whether it is necessary for China to have a major OEM in order to succeed in the automobile market. The rise of Tesla suggests it is still possible to create an international car company in the modern environment. Furthermore, the rise of technology firms such as Google/Waymo and Uber in the automotive space suggest the winner of the Internet of Cars may not necessarily be an OEM at all.

The government, both the central government and the local ones, are laying the groundwork for connected vehicles with Chinese characteristics. The government enacted a 10-year plan, “Made in China 2025,” in 2015 to transform China into an innovation hub in several sectors including the automotive industry. The government plans to have self-driving cars on the highways by 2019-2021 and in the cities by 2025.

If the plan is successful, 80% of the Chinese market for vehicle entertainment modules and all of its satellite navigation systems will be held by Chinese firms. The PRC already has high regulatory barriers that restrict foreign entry into the Chinese market, such as the ban on Google Maps (and Google in general) within the country.

While China lacks major OEMs, its major technology firms – Baidu, Alibaba, and Tencent- are chasing after the connected vehicle market. Alibaba is working with Shanghai-based SAIC in a joint venture called Banma to develop a vehicular “operating system” which will have touchscreens, GPS maps, and other smartphone functions. Banma’s CEO, Alex Shi, is selling the OS as a way to “empower the [OEM] and end-user with an Alibaba ecosystem and eco-data.”

The “AliOS” was so successful that reportedly 75% of people who bought the Roewe RX5 sport car in China bought it due to it having AliOS and a large screen. This year Banma wants to open up AliOS to developers and OEMs so it can become the Android of connected vehicles.

Banma also hopes to make this OS available worldwide; Citroën- which is in a joint venture with Alibaba- plans to launch its first “internet car based on AliOS” this year as well. Over time Mr. Shi believes the non-driving related software that will be used with AliOS- software such as entertainment and shopping- will be a crucial part of the connected vehicle’s appeal. He believes they may be as successful as their smartphone equivalents.

Baidu, the Chinese search giant, created CarLife as a way for the vehicle to act as a display and controller for applications on iOS and Android smartphones, similar to Apple’s CarPlay and Google’s Android Auto. Unsurprisingly, Baidu is also tackling the vehicular OS market with its Apollo self-driving software. Unlike many of its rivals, Baidu is offering its OS for free and opened up its code to the outside world to help Chinese OEMs rapidly join the IoC. This is in stark contrast to much of the world of commercial artificial intelligence (AI) which tends to shroud their algorithms from the public eye.

This may be surprising in a country better known for censoring information than releasing it into the open, but it may help Baidu accelerate their role in AI by allowing anyone to make improvements to Apollo’s software and making it harder for any of Baidu’s rivals- foreign or domestic- to dominate the AI field.  Baidu hopes this will help it put fully autonomous driving on urban roads and highways by the end of 2020.

See also: Japan — Riding along connected in the Land of the Rising Sun

The rise of Chinese technology firms is worrying some OEMs. McKinsey, an international consultancy, believes international customers may eventually prize software over the quality of the car itself, just as many Chinese buyers already do. A recent McKinsey study states that 64% of Chinese consumers are willing to switch brands if they have better in-car connectivity features, whereas only 37% of Americans do. Furthermore, 62% are willing to pay subscription fees for in-car connectivity whereas only 29% of Americans do the same.

While Apple has successfully created many loyal customers, the car industry may fear that most OEMs will transform into the modern equivalents of Dell and HP: cheap manufacturers of goods that serve no other purpose than to sell the lucrative operating systems inside them. For companies such as Daimler and Renault this is a nightmare scenario. The question in China may be which technology will rise to the top rather than which OEM will prevail.

Chna’s potential in the connected vehicle market should not be ignored. With its expertise in technology and manufacturing, it is now a major player in the race for autonomous vehicles. Many of the first autonomous vehicles will be made in China as well as Germany, Japan, and America, and many advances in connected and autonomous vehicle technology will be made there as well. This may be aided by the PRC’s centralized government, which is capable of pushing the country’s expertise in a singular direction. The question is whether the central government is pushing in the right direction.

The restrictions on foreign entrance into the market will lead foreign firms to keep as much information outside of China as possible to make sure its own best ideas are not taken from them. The result could be another case of Galápagos syndrome. The syndrome is often used to describe how Japanese mobile phone technology went down a very different path than its foreign counterparts. In Japan the “flip phone” remained in use far longer than in the West because Japanese firms created specialized features that were popular in Japan but not elsewhere. As a result these “feature phones” remained dominant years longer than non-smartphones were dominant elsewhere.

If China maintains its trade barriers it may risk having its own Galápagos situation, which is superior to the solution made in other countries but fails to leave the nation’s borders before the other countries catch up and surpass the Chinese product. Even worse, Chinese firms may go down the wrong path entirely and fail to gain traction even in China itself without government aid. This can be ameliorated through tests outside the country, such as the tests Baidu is doing in California.

The Chinese automotive industry is large and growing and it would behoove the global connected vehicle industry to pay attention to what China is developing internally and in collaboration with international markets since they have moved very quickly from a nation that Westerners associated with bicycles to the largest producer of cars with an interest in the connected vehicle market.

END_OF_DOCUMENT_TOKEN_TO_BE_REPLACED

One thought on “Connectivity East: China’s “People’s Republic” of Automation”