Home / Artificial intelligence technologies / Connectivity East: The Elephant or The Tiger in India? 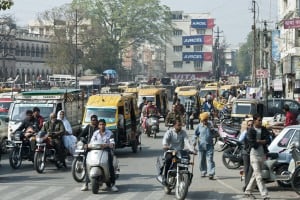 While job losses from self-driving cars are a concern in India, its complex driving environment may have more to do with a slow rollout of driverless tech.

While India is the sixth largest car manufacturer in the world, a top-six car-buyer market globally, and is also a technology powerhouse, one can be forgiven for thinking driverless vehicles in India makes little economic sense. The Indian Minister for Road Transport and Highways Nitin Gadkari declared that “We won’t allow driverless cars in India” because he believes they will take away jobs. The average pay of an Indian taxi driver is ₹14,267 ($208.87) per month and the light detection and ranging or LIDAR necessary for an autonomous automotive to work cost somewhere between $12,000-75,000.

A bigger obstacle to Indian automation is the Indian driving environment. Many Indian road signs are absent, falling off, or not visible, families are known to live almost on top of the highways, and there is no lane discipline. If we do not have the technology for cars to properly drive in Berlin or Boston within the next five years, how can it work in Bengaluru? As University of Michigan dean of engineering Alec Gallimore put it, the technology can work in India, but only as long as “we’re not copy-and-pasting from the West.” India, like major Asian economic rivals in the autonomous race, is making strides of its own.

See also: Will the coming autonomous car age herald the end of B2C?

Despite the Minister’s anti-autonomy stance, India is already working on autonomous vehicles. The Government is looking into laws that would allow for testing of self-driving car technology. The market for manual vehicles is sizable, with more than 3m cars sold per year. Indian firms are developing and selling “Advance Driver Assist Systems” (ADAS) to enhance driver safety by warning drivers of objects in a driver’s blind spot and giving collision warnings, and this technology may later be used in autonomous cars. Indian firms see a market for specific applications and locations, such as Mahindra and Mahindra’s driverless tractor and Hi-Tech Robotic Systemz’s autonomous tests on buses and trucks.

Remarkably, Indians are more interested in self-driving cars than many other countries. According to a poll by Ford Motors, 81% of Indians are “hopeful about the future of autonomous vehicles,” more than any other country except China.

By contrast, only 50% of Americans are hopeful and Germany is the least interested at 44%. The Times of India (ToI) did its own poll which shows India as the most “in favor of” self-driving cars at 49% compared to 30% worldwide. According to the Indians who like the cars in the ToI study, the population believes – autonomous cars are more comfortable, easier to “drive,” and more relaxing than their manual brethren, especially when parking.  The Tata Group and the Mahindra group, along with startups and engineering schools, will pour $7 trillion into the market by 2050.

The IT services provider Tata Consultancy Services has been using its sister company Tata Motors’ $3,500 Nano since 2013 to test its self-driving technology. Like their American and European compatriots, almost all the top automakers in India — Mahindra and Mahindra, Tata Motors, Ashok Leyland, BharatBenz, and Maruti Suzuki — are working on self-driving vehicle technology. Only Tata is willing to talk about their success with the technology in general terms. The general consensus is that self-driving vehicles will not be mainstream in India by 2025, although it may work in segments such as shuttles and mining by 2020.

There are quite a few Indian start-ups working in the connected vehicle market. One start-up, Flux Auto, is working on technologies which can retrofit manual trucks into autonomous ones without using LIDAR technology and with cheap cameras that have faster response rates. Other start-ups such as Netradyne are building cameras which can help drivers determine the cause of accidents. A surprising number of start-ups are trying to find alternatives to the expensive LIDAR technology. 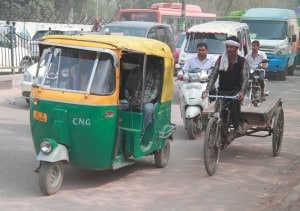 India is a tougher self-driving environment

Factors such as unfamiliar vehicles — such as the three-wheeled rickshaw that comes in different configurations — and a complex driving environment make foreign firms hesitant to enter the Indian autonomous vehicle market; Uber co-founder Travis Kalanick claims India would be the last place to get self-driving cars and Google head Sundar Pichai agrees with him. However, this does not keep foreign firms from investing in autonomous technology in India. For instance, Qualcomm is investing in the imaging company Tonbo, who already provides products and services to an Israeli defense manufacturer Rafael Advanced Defense Systems and heavy vehicle maker Caterpillar Inc.

India may not be far in this race, but its driving environment can give India a chance to innovate with different technologies so it can still race past its competitors. While India is technologically capable and has a large number of resources, the price of the technology is a crucial barrier to the success of the Indian autonomous vehicle. While some say the price of the LIDAR could drop from $75,000 to $400-500 between 2022 and 2025, that is still twice the average monthly salary of a 2018 Indian taxi driver.

The Uber incident in Tempe, where the car failed to understand the situation where a pedestrian was walking alongside a bicycle, reminds us how difficult it is to discern the details of an environment. Any autonomous vehicle that can function in contemporary India will have to deal with a variety of factors where animals and people often share a place in the highway.

A program designed in the West may not recognize all the details of an Indian environment. However, a program designed in India, which has to encompass the most unregulated rural roads and high-speed, multiple-lane highways, should function well in the West. More importantly, such technology will be applicable to countries all over the world. India has the opportunity to be very successful in the autonomous vehicle industry with exciting technologies.

END_OF_DOCUMENT_TOKEN_TO_BE_REPLACED

2 thoughts on “Connectivity East: The Elephant or The Tiger in India?”