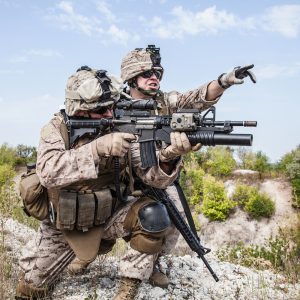 Squad X is a collection of autonomous surveillance machines that can be easily deployed on the battlefield. When intelligence is gathered, a machine will relay it back to a central computer located nearby, which will then parse the information and forward it to ground units.

SEE ALSO: Why autonomous motorcycles are destined for the road

In the video (posted below), DARPA shows an autonomous ground vehicle able to perform reconnaissance and flank security. Small drones are already utilized by the army for reconnaissance, but with AI embedded, it may provide soldiers with intelligence they may have missed.

“We are in a race with potential adversaries to operationalize autonomy, and we have the opportunity to demonstrate autonomy in a way that we don’t believe any nation in the world has demonstrated to date,” said Lt. Col. Phil Root (USA), the Squad X program manager in DARPA’s Tactical Technology Office. “Developing hardware and tactics that allow us to operate seamlessly within a close combat ground environment is extremely challenging, but provides incredible value.”

Squad X testers were also outfitted with Lockheed Martin’s sensor vests, once again providing intelligence to units that the soldiers may have missed. In the press release, DARPA ensured that while the AI will perform intelligence gathering functions, it will not provide analysis of the intelligence – this will be left to the judgment of the squad leader.

One of the reasons why Squad X is seen as essential is the necessity for real-time intelligence, and the ability for a squad to decide on the correct course of action. In Vietnam, Iraq and Afghanistan, there have been hundreds of accounts of command being too slow to react to changes on the ground, leading to tactical disadvantages.

The clear risk of adding more computer hardware to the battlefield is the possibility of corruption. A hacked system could feed fake intelligence to units, or jam communications between vehicles and soldiers. A closed system that does not feed intelligence back to center command may make the system more secure, but at the expense of limiting data to a single squad.