Home / Analytics / Datawatch: Lost in the Woods? Analytics Might Save Your Life 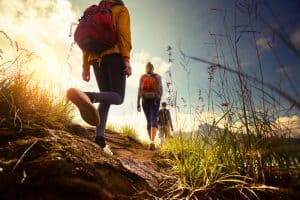 Data science is being used to help to locate the world’s lost hikers.

What would you do if you were lost in the woods? You may not be able to answer that question with any certainty. But thanks to some transformational analytics work, the people looking for you soon might.

In the United States alone, approximately 600,000 people go missing every year, often after venturing into America’s great outdoors: from the sprawling mountain forests of the Pacific Northwest to the vast, open deserts of the southern states. With little to no cell phone reception, dangerous wildlife, and few passers-by, these environments can pose a significant threat to life.

The official advice for those that find themselves lost is simple: stay put. Someone will find you. But that’s easier said than done. Getting lost is a high-stress situation, one that is known to trigger the fight or flight response and produce unexpected behaviors. Lost hikers often keep moving when they should remain still. They experience substantially reduced cognitive function, lose the ability to recognize landmarks, and sometimes even run away from rescuers or walk past other people without asking for help.

As a consequence, search and rescue teams often find themselves faced with an impossible task; having to predict the unpredictable. And when time is a significant factor in survival, this can be both frustrating and costly.

For this to change, it’s important to gain an understanding of how the human mind works under this level of stress in these specific circumstances and environments. Are people in the desert more likely to search for a water source than wait for rescue? What kind of conditions will cause people to lose their sense of direction?

Thankfully, we’re now getting close to some of these answers.

More and more frequently, researchers and rescue organizations are starting to see the value of data analytics in predicting the behavior of lost hikers.

In 2019, a study of 100+ news reports over a 25-year period helped shed some light on why people go missing in the first place. The research revealed some interesting findings. Firstly, 41% of hikers went missing because they accidentally veered away from the trail, either because they took the wrong path or made a slight deviation, maybe to take a picture or admire a view. This means that most victims aren’t those intent on bushwhacking their way through the great unknown, but day-hikers who pack light and are ill-prepared to be outdoors for long periods of time.

This is useful in helping us understand what causes the problem, but the real magic of analytics takes place when we try and understand the decisions people make when panic sets in and why.

In a recent study, data from tens of thousands of missing persons cases in the U.S., Canada, Australia, and the UK has been mined to try and identify the tendencies of those that are lost – and establish how they differ due to age, gender, location, and other conditions.

In analyzing this data, the study uncovered trends related to age, cognitive function, and gender that were equally fascinating and insightful. For instance, it found that children are less likely than adults to keep moving and are therefore more likely to survive. Children with autism specifically tend to find shelter in some kind of structure, whereas people with dementia are inclined to walk in a perfectly straight line, regardless of what obstacles stand in their way. Solo male hikers are the most likely to keep on walking until they are found – or not, as the case may be – and therefore require a much bigger search area than any other demographic.

The analysis of this data set and the results it has produced could be of huge significance for search and rescue teams and could transform the way operations are approached going forwards. For instance, algorithms based on these findings can be integrated with topographical maps and other third-party data sources like weather information. In doing so, analysts or even AI systems can predict the most likely locations of those who have gone missing, and search efforts can be prioritized accordingly.

This gives rescue teams the chance to replace standard, one-size-fits-all approaches with more accurate, data-driven search operations, which could lead to people being found far faster and dramatically improve their chances of survival.

Mobile networks answer the call of the wild

This application for analytics is beginning to find its feet in other areas of the world, too. GSMA’s Big Data for Social Good initiative develops partnerships between mobile phone carriers and other companies in a bid to help meet the UN’s sustainability goals.

In one such project, Russian mobile operator MegaFon is working with non-profit search and rescue organization LizaAlert, helping to accelerate search and rescue efforts for the tens of thousands of people who go missing in Russia each year.

MegaFon has developed an algorithm that uses the network data of its 80 million subscribers in conjunction with mobile big data analytics to identify likely witnesses to a disappearance.

The algorithm identifies people that were or often are in the same location where the missing person was last seen and automatically distributes text alerts to an average of 2,000 customers in just two minutes. Message recipients can then share data with LizaAlert and the police, including photographs, key information, and descriptions which are uploaded into a centralized dashboard. So far, the solution has been used for 250 searches in 38 regions across Russia.

Getting to know the great unknown with analytics

These examples show a huge opportunity and, importantly, a growing appetite for advanced analytics in search and rescue, but what we’ve seen so far is just the tip of the iceberg.

A combination of these solutions and a centralized database of information could make it far faster and easier to collate and categorize tips from the public, find those with pertinent information, and identify the most likely locations of the missing. And by incorporating AI, all of this could happen within a matter of seconds, making search practices faster and ultimately more successful.

For the hundreds of thousands of hikers who find themselves lost each year, this is one step in the right direction.

Nitin Aggarwal is VP of Data Analytics for The Smart Cube. He is an analytics executive and a seasoned business leader with 15+ years of experience across industries and functions. Based out of The Smart Cube’s Chicago office, Nitin leads the Retail, CPG & Consumer Markets practice in the US. Prior to this role, Nitin developed and scaled the data analytics practice, and managed operations across the globe. He also drove the practice strategy in terms of new capabilities, solutions, and technologies from India. Nitin studied electrical engineering at Punjab Engineering College, Chandigarh, MBA at University of Notre Dame, and got his Executive education in Analytics from SDA Bocconi. An avid sports person, he loves playing tennis and badminton, and is a committed follower of American football.