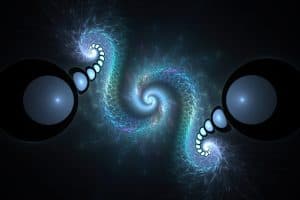 We can define the term digital twin today to be “a digital replica of any object or environment that enables full information for autonomous decision-making.”

The term “digital twins” is a misnomer, as the definition of “twins” is typically understood to mean one of two children or animals born during the same birth. NASA first coined the phrase “digital twin” in 2002 to define the digital replica of a spaceship – not a digital replica of a human or living being. By abstraction, creating a digital twin of a spaceship empowers computer systems to replicate any issues in real-time across every part of a spaceship, enabling autonomous, instantaneous decision-making where possible and alerting crew and teams at NASA to identify and rectify any issues when required. NASA created the first concept of a digital twin in the 1970s with the Apollo 13 mission, and today the concept has expanded well beyond just the spaceship application.

To better understand the term digital twin, one can look at Google Maps as an example of an aspiring digital twin project. I use the term “aspiring” because as I drove through downtown Toronto on the weekend, I was stuck in one block of traffic for 30 minutes due to a road closure not marked on Google Maps. I sighed in frustration wishing that Google Maps was a true digital twin project that could update road conditions in real-time while muttering empty threats about deleting it and using Waze. I just wish they had posted a road closure sign before I was stuck in traffic for 30 minutes while a crane was assembled in the middle of the road. Or alternatively, Google Maps should post traffic status autonomously!

I have seen scenarios on Google Maps that have achieved a sufficient digital twin status. In Tokyo, Japan, one can use Google Maps for assistance in subway car selection. The car is selected based on a) current car capacity, and b) proximity to exit or next transfer based on your end destination selected, and c) forecasted capacity for the oncoming train. From a travel optimization perspective, a sufficient level of digital twin status has been achieved for me, and the subway has been sufficiently digitized to enable Google Maps to act as an autonomous system in decision-making. Back in Toronto? Not so much. In Tokyo, I know what subway car number to get on and automatically head to the waiting area for that car number as sensors count capacity in real-time. But in Toronto, I know that I need to use my own intuition and decision-making skills to decide which route to take and which car to get on. Throughout years of commuting on the same route, I rarely guessed the right subway car to get on and was often left waiting for the next train. These are just a few very minor, personal examples of how digital twins can impact our lives in the near future.

Using the examples above, we can define the term digital twin today to be “a digital replica of any object or environment that enables full information for autonomous decision-making.” All variables and conditions are simulated on a real-time basis to enable full information for accurate decision-making. Therefore, the role of digital twins in the future of technology infrastructure cannot be overstated. Stepping back to spaceships as the first digital twin, it’s easy to see how creating digital replicas can be extremely valuable across our current infrastructure and applied to the next wave of infrastructure being built for tomorrow’s innovation.

Various institutions are embarking on an ambitious project to build out the infrastructure required to bring cities into the next industrial revolution. Learning from the buildout of the electrification and telecommunications buildout in cities during the 1930s and ‘40s – resulting in a sensor and wiring nightmare – we have the opportunity to learn from our mistakes during the next great infrastructure buildout.

Active Digital Twins is the latest term being used in practice to support the buildout of Integrated Intelligent Infrastructure (III) that is desperately needed to support this next wave of technology. With the investment in III combined with technologies such as lidar, the vision to enable digital twins and truly autonomous systems is quickly becoming a reality. A tsunami of data is expected to be created by this vision, and edge computing will undoubtedly play a critical role.

David Cronenberg’s movie Dead Ringers in 1988 starred Jeremy Irons playing both Bev and Elliot, identical twins who ran a gynecology practice out of a posh neighborhood in Toronto, Canada. Based on real-life twins Stewart and Cyril Marcus, the Harvard-educated doctors take advantage of both their position of trust and identical image. This was one of the first uses of computer-controlled moving-matte photography, effectively creating an on-screen digital twin of Jeremy Irons to simultaneously play both of the twins.

The concept of a digital twin is an ever-changing, evolving model that really comes down to perspective. In fact, given the above digitization of Jeremy Irons, I have to retract my first comment saying that a digital twin is not a digital replica of a living being. There is nothing precluding a human (or parts of a human) from being replicated digitally to form a digital twin. While the on-screen replication may have limited uses beyond film-making, The Human Genome Project and Neuralink could both be looked at as undertakings to create digital twins of the human DNA sequence and the human brain, respectively. Even simple wearables like a Fitbit or Apple Watch can be viewed as some form of digital twin that enables autonomous decision-making. However, in reality, digitally replicating humans as digital twins is not the enabler of autonomous systems and decision-making. Digitization of our environment is the true enabler, and it relies on the Internet of Things (IoT) to play a critical role in building and maintaining digital twins.

The Earth Archive Congress  (EAC) is an unprecedented undertaking to create a digital twin of the entire surface of the Earth – and everything on it – before the impacts of climate change take hold. The EAC is using high-resolution lidar and voxel mapping and began with the Amazon Basin as the initial area this year.

In Shanghai, China, the entire city has been cloned using a combination of technologies, including Epic Games’ Unreal Engine – the most widely used technology for developing video games.   Geographic information sensors (GIS), satellites, drones, and other sources are used to model continuously and gather data for real-time analysis.

Several other cities around the world are building similar digital twins using Unreal Engine. In Finland, the virtual reality (VR) studio zone has replicated Helsinki, and in New Zealand, Buildmedia has replicated Wellington. While these vary in terms of a true digital twin, there is global agreement that today’s technologies are advancing the imminent need to build the supporting infrastructure.

If the builders of today recognize the massive potential of digital twin-enabled intelligent infrastructure and the edge computing required to support these initiatives, the applications for the autonomous systems of tomorrow are limitless.

Brad Kirby is a seasoned finance & technology professional with over 15 years of experience, currently serving as COO of EDJX International, as Co-Host of The Next Wave Podcast with Dean Nelson (former Head of Uber Compute) and James Thomason (Former CTO of Dell Cloud) and as an advisor to a number of tech start-ups. He has presented at several global events, including IEEE World Forum of IoT (2020 & 2021), Tech Super Expo 2020, Edge Computing World 2019, and Futurist 2019. He also lectured at York University's Lassonde School of Engineering. Prior to entering full-time into tech start-ups, he spent a dozen years between Deloitte and Brookfield Asset Management. He is a Chartered Accountant, Chartered Professional Accountant, and Certified Blockchain Professional who was nominated for the Young Entrepreneur Award in 2004 while completing his Finance degree at Western University.