Home / Trending Now / Does the Rise of AI Mean We Should All Be Developers? 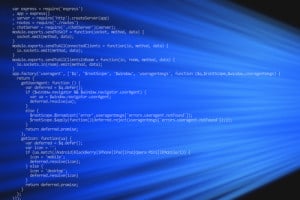 Is coding the newest and coolest language you need to be fluent in? It may get you a foot in some doors or solve problems, but how critical is this skill?

If you have an Amazon Echo or Apple IPhone, these artificial intelligence requests probably sound familiar.

Even if you’re scratching your head, you’ve most likely typed requests with a chatbot or have repeated your purpose to call with an automated operator.

Just the fact that these are normal daily interactions with artificial intelligence shows how far we’ve come — from a black screen with a pulsating mouse in the 80s to now, well, this.

Even the names for AI technology — such as Alexa and Siri (both human names) — reveal that the line between technology and humanity is becoming blurred.

[ Related: Who Holds the Keys to IoT? Developers ]

With the use of AI becoming more and more integrated into everyday life, it’s easy to think that we will all need to be developers to keep up with technology’s demands.

With nonprofit organizations, Silicon Valley and even the former President advocating for everyone to learn to code, it’s hard not to assume you need this vital skill in your tool belt.

You’ve probably heard the news: The job market is going tech and soon everyone without coding skills will be at the bottom of the food chain, and the rhetoric goes on.

The truth is, there is truth to these claims. The Chicago Tribune reports that 182,220 new jobs were added last year, largely due to expansion in the IT services and custom software services.

Even more startling, the media outlet estimates that the tech industry supplies $1.3 trillion to the American economy.

But will everyone turn into developers? Does everyone need to know code? Well, yes and no.

Not Everyone Will Be an Engineer

The reality is, while the tech industry contributes $1.3 trillion, that’s only 7.5 percent of the American economy. Even if it eventually makes up a larger percentage, the U.S. needs other contributors to its workforce besides engineers.

To say that we all will (or should) become developers dismisses other equally important jobs —such as teachers, artists, writers, chefs ….

However, coding can impact your job. According to this Forbes article, an anthropologist who learned to code says it enhances her job. She could create a website and blog — a platform for her anthropology (and coding) skills.

[ Related: The Future of AI Is All About Education ]

So, coding can enhance teaching, music, writing, and culinary jobs, but coding can’t replace them. Instead, coding is an analytical skill that helps create well-rounded individuals, especially for those who primarily use their right brain (responsible for creativity).

Don’t Need to Be a Mechanic to Drive a Car

Perhaps, some coding may come in handy if there’s a glitch in your software, just like knowing how to patch a flat could save you a bill from AAA.

Learning the basics can help cut down on minor costs and save you the time you’d normally be spending waiting for IT, plus you may find yourself more appreciative of the software you’re using, but knowing how to code, how real user monitoring works, or being a developer doesn’t give you VIP access; the reality is, anyone can use a Smartwatch or play Xbox — with or without a computer science degree.

Coding is touted as the latest and coolest new language you need to be fluent in. Yes, coding may get you that foot in the door or even a raise if not cut some costs.

But the rise of AI doesn’t mean everyone will become a developer, nor should everyone be. Coding isn’t the answer to a bright future, but it’s one more skill it wouldn’t hurt to add to your toolset, enhancing your current employment but not overshadowing it.

With several organizations offering free online resources, learning how to code is easier than ever. Take a stab at it. You don’t have to become a developer — unless, of course, you want to.

Wendy Dessler works at ManageBacklinks, where she helps businesses build their audience online through outreach, partnerships and networking. She frequently writes about the latest advancements in the SaaS world and digital marketing.