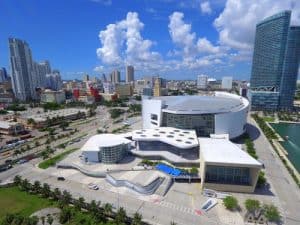 Professional sports teams are looking for new and better ways to connect with every fan. Real-time data and analytics are helping enhance their experience.

Professional sports teams seek close rapport with their fan bases, but often had very little understanding of who those fans were. Now, data and online services are enabling teams to understand their fans on an intimate, real-time level.

The organizers at Miami Heat basketball games and other events at Miami’s American Airlines Arena want to know who’s attending their events, so they can better serve them in real-time. To accomplish this, they moved their ticketing to mobile phones, conjoined with a mobile app that provides a running commentary on the game or event, as well as providing incentives or discounts on refreshments and souvenirs.

The mover behind the Heat’s move to mobile — which led other teams across the league — is Matthew Jafarian, VP of digital strategy and innovation for the Miami Heat. At a recent presentation hosted by Software AG, Jafarian explained how an app is bringing fans and attendees closer to the game.

“We’re all being transformed digitally, whether we like it our not,” he said. “We have a lot of opportunity to capitalize on this. First and foremost for us was understanding who was coming into the venue. We want to still know who you are.”

The organization’s “mobile-only entry” policy, instituted in the summer of 2017, requires use of the Miami HEAT Mobile App to access tickets. The organization moved away from paper tickets to help improve the fan experience. At this time, 85 percent of fans now use the app,
Jafarian says. “I now know who these fans are,” he adds, noting that 35 percent also take advantage of services provided through the app during the game.

In addition, the mobile tickets can be sold or given to other parties. In the process, the Heat organization gains a greater understanding of who the new ticketholders. “If you buy a ticket and you give it someone else, I don’t know who he is, even though he’s coming to the game, and he’s my fan. That’s a fundamental problem in sports.”

There are no barriers to transferring tickets to new parties, Jafarian says. “We don’t restrict access. In fact we want you to transfer the tickets. If you give a ticket to Joe, I want to know who Joe is.. we have a lot of corporate customers — law firms, banks, things like that. And they’ll buy six, eight seats, and don’t go to the games themselves. They give it to their customers, they give it to their partners, they give it to their prospects. Those people have an affinity for the Heat, or the concerts, and they have the wherewithal to come back, so we want to understand them as well.”

As the game progresses, the Heat relies on multiple, integrated data sources to engage with fans in attendance. Along with providing updates on the progress of the game, the Heat app enables fans in attendance to purchase food and merchandise, which provides the organization data on fan preferences. “Our ERP, if you will, is Ticketmaster, which provides our ticketing system. We have a retail point of sale system. We have a food and beverage point of sale system. We have a WiFi system. We have a dining reservation system. We’re basically like a mall, except we’re only open about four hours, for events. All these systems are talking to each other and we’re collecting data on our fans, and we aggregate it all into a 360-degree fan profile.”