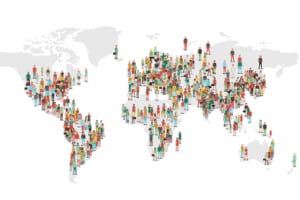 Telecoms have valuable real-time data they can sell for urban planning. The challenge: build a platform to analyze it.

Typically urban planning efforts relied on government sources such as census records, which could be unreliable and dated by the time they were produced. As more of the population begins to use smartphones, apps, and the internet, however, urban planners now have new sources of big data at their disposal.

Some companies already use dynamic population mapping to offer their own commercial services—Uber, for instance, built its entire business model off cell-phone data, as did Waze, Lyft, and similar services.

But what if a company simply wanted to sell the data they were already collecting to urban planners?

Swisscom, Switzerland’s leading telecommunications provider, recently embarked on such an effort. The company recognized that it could employ its trove of mobile user data to enrich urban planning across the country. The opportunity, as described in a Lightbend case study, was that where census data tended to be static, outdated and limited, anonymized mobile data from Swisscom’s network – comprising more than three out of five of the country’s mobile users — could support a wide range of use cases where comprehensive, real-time data on urban populations unlocked huge opportunities, including accurate population density mapping.

Mobile equipment can contribute anonymously to a real-time view of the head count of a group of people in the population of a given location, which can help derive a density map of the area. This data can be refined to the density maps with street-level granularity. The relevance of this information is much better than a census since it can be obtained continuously, in real-time, as opposed to the manual headcount usually collected by administrations on a yearly basis.

Swisscom set out to create a data analytics platform capable of delivering detailed analysis at a nationwide scale. and which could be sold to urban planners for key use cases. To accomplish this, the telecom’s Mobility Insights Team set out to build the platform that could deliver these new data services. In a nine-month period, the team developed a set of commercial assets and acquired its first paying customers.

The volume of data, the requirement for real-time computation, and the associated performance requirements led the team to Apache Spark at the big data processing layer. The platform also needed to match the stringent quality of service expectations — high availability, reliability, and resilience under peak usage — which led Swisscom to the Scala language and the Lightbend Reactive Platform. The Scala language delivers interoperability with Java libraries and legacy code, as well as the Scala-graph library for large cell graphs. The platform also tapped into Spark Streaming and Kafka, a publish-subscribe system for building real-time data pipelines.

“We can derive aggregates of the location of populations from the regular functioning of the mobile network,” said Francois Garillot, big data scientist at Swisscom, in a Q&A associated with the case study. “This asset can be turned into insight, through the use of various data analytics and machine learning techniques.”

An important benefit of the effort is “being able leverage the data generated by the network into a deep, dynamic analysis of the terrain and daily lives of the population of Switzerland,” said Garillot in the Lightbend Q&A. “This sort of analysis becomes particularly insightful when it helps customers make decisions in real time, as movements and events happen.”

The telecom’s mobile users’ devices “contribute anonymously to a real-time view of the head count of a population group in a given location, which can help derive a density map of the area,” Garillot explained. “This data can be refined to the density maps with close to street-level granularity: this already supersedes the census surveys of old, which tended to be static, outdated and limited. The relevance of this information is much better than a census since it can be obtained continuously, in real time, as opposed to the manual headcount usually collected by a government administration on a yearly basis, at best, and on a small sample.”

An additional insight that can be derived “is an origin-to-destination matrix that can be used to figure out where people come from and where they are going with respect to a given area of interest,” said Garillot. “This is valuable, for example, for civil engineers working on the particular tools needed to travel through a location, but also for traffic planning, transportation planning, and ultimately can be used as one of the blocks for building a smart city.  Ideal users of this kind of visualization include organizations working in civil engineering, public transportation planning, administration and location management, marketing, and tourism.”

Related:
A Waze for fleet-fuel management