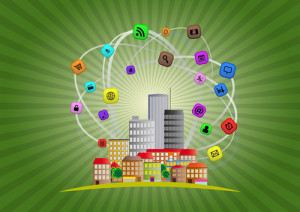 One smart city mayor says to enterprise execs “Don’t come to us with solutions, ask us what we want to do.” What’s the best way for P3s to come together?

The answer lies in our history and the path towards emerging tools and technologies. The essence of P3 innovation in the future will not be in the realm of financial engineering, although new forms of new structuring will certainly be vital to their success.

Over the past two centuries, nothing has reshaped our lives more fundamentally than technological innovations.

The forces unleashed by earlier innovations created opportunities for the men who would later become railroad tycoons, steel barons, and bankers. Many of them were keenly interested in driving the U.S. westward, using an extensive network that linked railways, enabled unprecedented commerce, communications, and settlement.

See also: What is the favored smart city network — 5G, LPWA or Mesh?

Their railroads fundamentally altered America’s economic and political geography, and how people thought about the previously distant frontiers that they could now reach by the comfort of rail.

But this success story of innovation is marred by one key fact: each stage of new infrastructure development was never really assisted by the actions of government leaders, either elected or appointed.,.

Look around the corner to the new year. Let’s think about new and emerging innovations which are already reshaping our urban communities.

Tomorrow is no longer “around the corner,” it’s here now, manifesting itself in unpredictable places and manners. There are amazing tools that will be available to citizens in the future, but this will also be a Pandora’s Box with some pretty big implications for how we organize our social and economic systems. As of now, there’s not much clarity on these choices.

The year 2010 marked the beginning of what might be called “a multi-year strategic dialogue” about these tools, and the vital trends which have been reshaping our cities and our planet. Why 2010? On Sep 22, of that year the United Nations convened the World Summit on the Millennium Development Goals and major players (like ISO and ITU and IEC) saw more clearly the potential for lasting transformation.

There is good news and bad news on at least one of the new tools: The Internet of Things (IoT). According to Gillian Tett, the author of The Silo Effect, “we live in a world that’s hyper-connected, but incredibly fragmented.” IoT will only accelerate these trends.

The Gartner Group’s prediction is that by 2020 about 50 billion smart objects will be connected to the internet. As it evolves, sensor technologies have opened up new possibilities for achieving dramatically better levels of efficiency for all of the varied types of urban-centric networks — energy systems, transport systems, building systems.

As it becomes more widely distributed throughout a city, IoT technologies are making it possible for everyone in that city – from the private sector, public sector, non-profits and academia — to leverage the inherent values contained within the vast quantities of data and information.

At a minimum, a city that becomes smarter is a city that’s a more attractive place to live and work. But on the road to becoming a smarter city, there are some key questions that need to be asked: How does a smarter city compete with other cities?

Certain cities around the world are offered as exemplars of smarter urban systems — but how did they get started on this road? What future plans are such cities already committed to? What should it look like and who should pay for it? How to convince people living and working in cities to share their data, while ensuring that it’s secure?  How to engage the city’s residents and taxpayers and bring them on this journey?

One place to start is with success stories — the local and global examples of best practices. There are some constituent elements that comprise the core of a smart-city system:

Process: Delivering the right information to the right place, person or machine at the right time

Things: Physical devices and objects connected to the internet and each other for intelligent decision making

What Are the Main Components?

With that in mind, there are five critical components for a successful city digital implementation:
Converged management network: Networks within any urban footprint may operate with a patchwork of disparate systems and processes—sometimes within the same agency or authority—that don’t communicate with one another.

That can lead to delays in the transfer of critical information and an incomplete picture of the challenges that are preventing cities from realizing the full benefit of these efforts. By converging those systems into one, they gain the ability to share information with one another, providing a reliable, transparent, and scalable technology foundation to build upon.

Resilience at scale:All of this convergence, in addition to the billions of devices that are producing and communicating data, requires that the network be capable of scaling exponentially while remaining manageable and stable.

Distributed intelligence: The sheer amount of data that needs to be analyzed, coupled with the rapid speed with which decisions need to be made, requires the compute capacity to be closer to the source of the data, so data can quickly be filtered and analyzed, and then transformed into actionable intelligence. Placing compute closer to the edge – now often called the “fog” layer — is separate from the cloud.

Application enablement: An open, standards-based platform is essential for enabling third parties to quickly create robust and useful applications that are capable of analyzing, using, and adapting to intelligence about the physical world.

Security and privacy: Of course, security is a must. In addition to existing network security solutions, like firewall, IPS, and secure access technologies, robust security must be integrated throughout the IoT implementation with a layered approach required to achieve a comprehensive solution with no single point of failure.

It’s high time for leaders to think of security in a completely different way. While existing network security can simply quarantine an unknown or suspicious device, in IoT networks that device may serve a critical function. For example, if the device is a life-support system or even a system that manages the operations for a manufacturing plant, the cost of quarantine would be too great. So there’s a need to gain a deeper understanding of every device touching the network, and to identify — and ideally control – whatever is tied to it.

Where the Infrastructure Hits the Road

The private sector is investing huge amounts of time and many billions of dollars annually to develop the technologies that make a connected city possible.

While these investments have been widespread, they have focused in certain key areas:
#1: Technologies that empower people to collaborate anywhere, across voice, video, messaging, and social applications to work more productively and deliver higher-quality services.
#2: Network infrastructure solutions that make it easy to connect people and things anywhere and everywhere.
#3: Data center and virtualization technologies that allow for the development, testing, and deploying innovative applications faster and with less risk.
#4: Industry-leading security enables any organization to take advantage of new connections with total visibility, control, and threat defense.

All of these capabilities are being integrated into complete, ready-to-deploy solutions that extend across local government and city operations holistically. They can, and must, be applied consistently across the areas of focus, across the spectrum of city services from public safety to education.

Given where cities are and the obstacles city officials perceive, what can be done to accelerate the journey? Here are some important steps that have worked elsewhere:

Find a visionary leader: The right champion within city leadership can be the catalyst to overcome all the other hurdles in the complex evolution of a smart city. This step is, in fact, a critical step and should be one of the first to be addressed.

Move beyond planning: The planning initiatives undertaken in the cities we’ve surveyed are big first steps. However, they need to move plans out of planning departments and into action. The process includes cutting through city bureaucracy and gaining greater visibility and input from citizens, businesses, and technology vendors.

Choose pilots that prove value: The planning efforts help in truly understanding how to think big initially with a holistic, citywide evaluation and engaging the stakeholders to get buy-in. But careful pilots with clear estimates of costs, benefits, and a simple ROI analysis for each project will build the path to success for wider-scale efforts.

Understand costs and benefits: An informal survey of public-sector executives indicated that cities understand the benefits of a smart city on a global level, but they do not understand how to translate these benefits into specific metrics that apply to their cities, nor do they have the models or tools to do so. In addition, it is clear that cities need to get a firmer estimate of the costs involved in smart city projects. Their lack of comprehension is understandable, because the array of different technologies that go into a smart city is vast, with complexities that are beyond the technical knowledge of any city, large or small.

Explore available funding options: Although government bonds and other similar options may be a common choice historically, many cities appear not to be aware of better financing options available for smart city endeavors. Many innovative and relatively new financing mechanisms are available today, yet cities don’t seem familiar them. With different options for procuring technology, for instance, cities can shift to a business model that defines these projects as operating expenditures versus capital expenses.

Improve internal support: To alleviate the internal barriers and lack of cross-vertical governance, it’s important to create a cross-departmental team to help pool funding sources and align priorities in tackling strategic projects. For instance, during a smart city evolution, cities will have many opportunities to create an ecosystem to solve individual departmental problems collectively, and these opportunities can help create significant efficiencies on many levels.

Explore technology options: Cloud- and software-as-a-service (SaaS)-based smart city solutions that can create economic efficiencies for cities are available today. Here, too, these solutions also create staffing efficiencies, because external experts can become extensions of internal IT departments for little additional investment. Wherever possible, incorporate Smart Regulations and Open Architectures to help mitigate interoperability concerns. (In this case, “Smart Regulations” means those that aim to facilitate and enable the city’s adoption of data-power technologies and services).

Start mobilizing technology: The lack of applications designed for mobile communications—which are core to smart city solutions—will certainly be problematic for cities. Mobile usage is skyrocketing, and businesses, tourists, and visitors who are tech-savvy will soon expect a city’s mobile communications to meet their needs.

Learn from peers: Cities around the world are already undertaking massive smart city initiatives, and they are willing to share their stories. Many companies and cities are already sharing their insights.

Find the right partners: The right tools, resources, and expertise can help cities with each of the steps mentioned here. With the right partnership, officials can gain the support they need to evolve quickly and realize the smart city benefits that are available for them.

Cities are pushing forward quickly, but they need to speed their adoption of smart applications of advanced technology in ways that enable better outcomes for citizens.

According to George Ferguson, the long-standing Mayor of Bristol, technology providers need to remember the first principle: “Don’t come to us with solutions, ask us what we want to do.”

Gordon is the Co-Founder of Meeting of the Minds, a global thought leadership network and knowledge-sharing platform focused on the future of sustainable cities, innovation, and technology. He serves as a consultant to Cisco focused on Internet of Things and Talent. Gordon has worked in the area of emerging technology for three decades, most recently consulting on projects which harness the power of data (whether in the cloud, pulled via mobile networks from IoT-enabled end-points, or other advanced technologies) for solving complex problems.