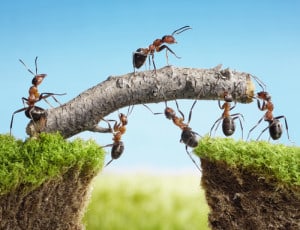 With blockchain and cognitive computing being turned to practical applications, we’re learning more and more about what they can do alone — and together

When it comes to revolutionary technology, the blockchain and cognitive computing are two at the top of the list in 2018. With these technologies finally being put to use in practical applications, we’re learning more and more about what they can do on their own—and together. Let’s take a look at how some industries can take advantage of this powerful combination.

Cognitive Computing and Blockchain: The Basics

Before we can discuss what these two technologies can accomplish together, it’s important to understand them separately.

Cognitive computing is essentially using advanced artificial intelligence systems to create a “thinking” computer. Deep learning allows cognitive computers to learn and adapt as they receive new data, and they do not simply execute logic-based commands as computers have traditionally done. Because the technology is evolving and encompasses many different AI systems, there is no standardized definition for these systems. However, the term is best used to describe computer systems that mimic the human brain.

The blockchain, a new system for storing information and processing transactions, was created for the distribution of bitcoin, the world’s leading cryptocurrency. It’s different from most databases because it uses a distributed ledger system, rather than a centralized database. In basic terms, that means that the information is distributed in thousands of computer networks, instead of being stored in one location. The information is updated regularly, and everyone on the network can view it.

So how do these two technologies work together? Since we’ve only just scratched the surface on the capabilities of both the blockchain and cognitive computing, there’s still a lot of opportunity for bringing these technologies together. One of the largest areas for potential expansion is in tandem with IoT (Internet of Things) growth.

Many industries are beginning to see how using interconnected devices can help them automate and improve their processes, but there are currently limitations on scaling and security with centralized systems.

IBM, a leader in artificial intelligence, has already integrated its Watson supercomputer into a platform for IoT, allowing businesses to make better use of the data they collect using these devices. IoT devices collect the data, but the majority of this data is “dark”, meaning that it just sits in storage and isn’t used for anything. Cognitive computing has the ability to process this data in ways humans can’t—while gaining valuable insights that can be used in strategic planning and performance measurement.

So how does the blockchain fit into this equation? Mainly, as a way to scale IoT usage and for security purposes. IoT data can be extremely sensitive and valuable to businesses—the last thing a company wants is for a data breach to occur. Blockchain ledgers also create logs for context, which provide detailed information about anomalies and problems and break down exactly where and when these problems occurred.

For now, most companies that are using blockchain technology are in the financial industry, which is also one of the first industries to combine the two. Blockchain technology has been used to make transactions safer and more trustworthy for consumers, while cognitive computing is helping some financial institutions move away from passwords and toward biometrics, such as voice recognition.

One example of these new technologies at work in the financial industry is India’s Yes Bank, which is leveraging cognitive computing and blockchain simultaneously for a secure, streamlined experience for customers. Using the blockchain, the bank pays vendors in real time, and the distributed ledgers give transparency and trust to both parties involved. In cognitive computing, the bank uses Watson technology to help support customers without staff involvement by allowing the system to access the vast amount of data the bank stores and using it to help answer questions.

IBM is also exploring the combination of technologies by partnering with the startup Everledger to see how blockchain with IBM Watson technology can help reduce fraud in the diamond industry, taking the guesswork and manual sleuthing that is the current process. The Everledger system is designed to take the paper-based system of diamond authentication into the blockchain to confirm the authenticity of rare gems—a system that could be expanded to other goods.

By 2020, there will be 30 billion internet-connected devices worldwide. With our current solutions for storage and data processing, we won’t be able to keep up with these devices if we don’t harness technologies like cognitive systems and the blockchain. There are so many insights businesses can use by harnessing dark data and letting cognitive computing systems take over to gain a competitive advantage. Working in tandem, cognitive computing, blockchain technology, and IoT can automate and monitor many industry systems for greater optimization, reduced waste, and improved security.