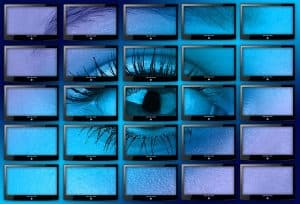 Video surveillance is becoming ubiquitous. But there is a gap between what’s practical today and fictionalized perspectives common in popular culture. Edge analytics has the potential to close the gap.

To illustrate the difference between impressions and reality, just look at the way video surveillance is portrayed. Here’s a thought exercise: you’re making a movie, and you want to quickly give the impression that a character is all-seeing and all-knowing. How do you do it?

If you’re one of the countless directors who have faced this exact dilemma over the years, your answer is probably to place them in front of a giant wall of video monitors. As far as visual shorthand goes, this is actually fairly effective. It lets the audience know that the character has eyes and ears everywhere and might be watching or listening in at any given moment. Unfortunately, this interpretation of how modern surveillance works bears little resemblance to reality. With respect to heroes like Batman, Jack Bauer, Jason Bourne, and others, humans have limits to their observational skills. No one individual—no matter how great their attentiveness—can effectively monitor dozens (or hundreds) of camera feeds for suspicious activity.

Fortunately, they no longer have to. As IP cameras have replaced analog cameras, their capabilities have steadily increased. Today’s edge devices, including cameras and other sensors, have more processing power than ever, enabling analytics capabilities that security teams could only dream of in prior years. Using onboard analytics, today’s cameras can be trained to automatically detect objects, activities, sounds, and more, providing security personnel with the real-time data they need to make critical decisions. With open-architecture solutions and software development platforms on the rise, these powerful edge devices can be integrated with new solutions as they are developed, effectively future-proofing video surveillance.

Understanding the value of the edge

At its core, analytics is simply the practice of identifying and interpreting patterns within information and data. Far from being a new concept, the idea of analytics has been around for a long time—it has been held back by a variety of limitations, both human and technical. An individual can watch a camera feed focused on the front entrance of a building for hours, and they can probably identify any suspicious activity, such as someone trying to force their way in. But they probably won’t be able to provide a breakdown of how many customers wore a red shirt versus a blue shirt, how many approached from the east versus the west, or how many drove versus walked or took the bus. While not impossible, obtaining this data would be neither efficient nor scalable.

With advancements in technology came the ability to identify these patterns—but limitations in areas like bandwidth and processing power still made the technology difficult and costly to install, calibrate, and maintain. Transmitting video to servers for processing requires a tremendous amount of bandwidth, and the low reliability of the technology left many users disillusioned as these analytics often failed to live up to what had been promised. It is only in recent days that edge technology has given users the ability to fully make use of today’s analytics technology in a video and audio surveillance context.

Modern chipsets have granted these devices a significant boost in processing power, meaning that these analytics can be loaded onto the devices themselves. This vastly reduces the amount of data that needs to be relayed to cloud servers, and the corresponding reduction in bandwidth needs has allowed these analytics to become more commonplace. Similarly, the rise of artificial intelligence, machine learning, and deep learning technology has made it increasingly easy to train new analytical models, which makes them significantly more accurate and reliable. What’s more, the technology can be upgraded via software and firmware updates, giving these devices considerable longevity. No more swapping out the entire device anytime a technological upgrade comes around.

The specifics of modern analytics

In theory, it’s great that today’s edge devices are smarter, faster, and more powerful than ever. But what does that mean in practice? From a surveillance perspective, it means less reliance on human cognition and increased reliability for automated tools. That means a dramatic reduction in false positives and an improved ability to filter out “noise” in both video and audio recordings. And while humans may not be able to instantly classify data into a wide range of categories, today’s devices can process exponentially more information, generating the metadata needed to effectively categorize and cross-reference data throughout the enterprise.

This volume of information also means that analytics can be more effectively trained for greater accuracy. This can further reduce false alarms by enabling a camera to differentiate between a human trespasser and a raccoon digging through a dumpster. It is also possible to train these devices to recognize specific noises, such as gunshots or breaking glass, that serve as clear indicators that a security incident is taking place. Even aggressive behavior and raised voices can serve as triggers, letting security personnel know that a potentially dangerous incident may be unfolding. In most cases, this can dramatically reduce the response time. It even has the potential to prevent an emergency before it occurs. Even something as simple as triggering an automated intercom message if a trespasser is detected can improve security, as simply letting an intruder know they are on camera is often enough to frighten them away before they can do any harm.

This expansion of analytics capabilities has also allowed the technology to be applied to more than traditional security-based surveillance. Amid the COVID-19 pandemic, cameras were trained to do things like recognize proper or improper personal protective equipment (PPE) use and identify queues and gatherings of people as they formed. In retail contexts, they can track customers’ movements through the store, helping inform store layouts and merchandising decisions, and even recognize empty shelves and generate out-of-stock alerts. In industrial and manufacturing contexts, they can even be trained to spot defective products on assembly lines or identify ways to optimize certain processes. These devices are not designed to supplant the role that humans play in this sort of surveillance and observation but to arm them with better, more reliable knowledge capable of augmenting business intelligence and operations alongside security.

The rise of open-platform architecture has given enterprises the ability to integrate a wider range of analytics into their existing systems, opening up opportunities to gather more data than ever before. Rather than remaining locked into a single manufacturer’s line of products, users can integrate new and interesting analytics tools as they arise, allowing them to evolve their security and data gathering apparatus as technology becomes available. This significantly extends the lifespan of a given product, reducing the time, money, and resources needed to maintain and update these systems.

As edge devices have grown more powerful, their ability to process vastly more information has enabled advanced analytics to become commonplace. These new analytics tools have revolutionized the security industry, improving the accuracy and reliability of video and audio surveillance solutions, but they have also made it possible to apply this same technology to areas other than security. Today’s businesses have more information than ever at their fingertips, allowing them to gain unique and actionable insights that would never have been possible just a few short years ago.

This technology will continue to improve, and edge analytics will become even better at recognizing patterns, highlighting anomalies, and generating predictive insights. The technology can not only help businesses achieve specific security and operational goals but identify opportunities for growth, efficiency, and improvement that they may never have known existed.  As the technological landscape continues to evolve, investment in edge analytics is one of the most effective ways to help future-proof operations.