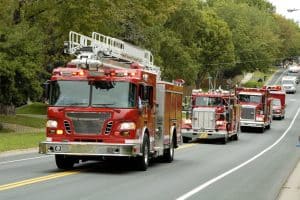 Part of larger Smart City buildout with AT&T in the unofficial capital of Silicon Valley.

The City of San José, Calif., has become the first U.S. municipality to connect every member of the public safety and emergency response staff to a dedicated FirstNet wireless network. In a major crisis, the network – part of a larger buildout of smart city infrastructure – ensures responders all can communicate and share critical data with one another, in real-time.

“Implementing FirstNet at full scale across the City is key to helping us create a new standard for public safety,” said Sam Liccardo, Mayor of San José, in a statement. “We believe this is a model for cities across the country to ensure those charged with maintaining the safety of our residents and communities have the tools they need to stay connected during disasters and emergencies.”

FirstNet doesn’t replace the existing walkie-talkie-based voice system that emergency personnel rely on every day to respond to incidents. Rather, in the event of a major event such as a power outage, FirstNet will ensure emergency personnel can not only communicate but also share data.

FirstNet wireless networks are based on bandwidth the Federal government has allocated to make sure emergency personnel can securely communicate with one another during a crisis.

Gaining access to FirstNet requires cities to form public-private partnerships with telecommunications carriers to deploy microcells and upgrade cell towers. In San José, government officials are making available streetlights and other local infrastructure through which carriers will provide faster 4G and 5G wireless networking services in return for the carriers providing access to FastNet.

As part of the larger effort, working with AT&T has resulted in more than 4,000 small cells being deployed, upgrades to wireless towers, another 1,000 miles of fiber being laid, and more than 5,000 hot spot and mobile computing devices being deployed, says Dolan Beckel, director of civic innovation for the City of San José.

AT&T is also deploying 670 smart lighting controllers and 550 LEDs that improve lighting in 14 city parks and is providing $200,000 to help local community organizations in the city to bridge the digital divide.

All told, the public-private partnership between the City of San José will involve somewhere between $300 to $400 million, says Beckel. AT&T said it decided to work with the City of San José because local officials committed to deploying FirstNet across the entire city all at once, he added.

“We didn’t set out to be first,” says Beckel. “But people told us whenever there was an emergency they didn’t feel truly safe until they could communicate with loved ones.”

Next up, Beckel says the City of San José with help from the state of California hopes it extends its implementation of FirstNet to surrounding communities such as Mountain View, Palo Alto, and Sunnyvale.

“Anytime there is an emergency we’re all in together,” says Beckel.

The challenge, of course, will be getting every local adjacent community to the City of San José to the give gaining accessing FastNet the same level of priority hopefully before the next inevitable emergency occurs.