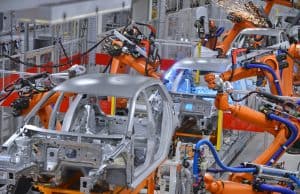 The growing power of computers combined with advances in AI make the fast-learning virtual worker a reality.

Can industrial robots learn to think and act like human operators?

There’s no question that there are more and more industrial robots flooding onto production floors every year, growing at a clip of 12% a year, according to the International Federation of Robotics. This calls for a more meaningful role for machines, and as a recent report from BBC observes, “the proliferation of robot coworkers has prompted psychologists, roboticists and managers in a variety of fields to explore what makes for a successful robot-human collaboration, and what makes these relationships go awry.”

Perhaps robots can benefit from lifelong learning, just as humans do. These topics were recently addressed by Fredrik Bruhn, CEO of Unibap AB, who reports his company has been active in developing intelligent robots capable of learning and absorbing increasing amounts of knowledge as time goes on. This includes “virtual operators where we train robots to have the same knowledge and understanding as a human,” he explained in a discussion with CXOTalk’s Michael Krigsman. “When we put our systems into smart factories, they are basically a high school engineer taught to know what assembly, grinding, drilling, or painting coating quality assurance is like. Then, when they work inside the factory, they learn. After about six months to a year, you have a master’s degree. About a year and a half later, you have a Ph.D. level.”

The growing power of computers, combined with advances in AI, make this fast-learning virtual worker a reality, Bruhn explains. “We’re able to harness the power of deep neural networks, which really changes the way you can do AI in practical applications,” he says. “There has been significant progress over the last five years on algorithms that allow us to, much faster, train systems together with humans and, in certain cases, cut the human out of the loop.”

The “learning” part of robotic intelligence comes in with machine learning, Bruhn explains. While traditional robotics is based on fixed programmed pathways, highly intelligent robots generate their own code. “Given the operating modules that we have taught the system, you can take a CAD sequence directly to an operation,” he says. “As long as someone has made those CAD drawings, and created that sequence of assembly, then the system will figure it out itself. The actual code that runs the robot is being reasoned.”

It’s likely to take some time before robots– even those endowed with Ph. Ds — can take on the higher-level cognitive work of humans. “People, by and large, are still smarter than robots,” the BBC report states. “Robots can do specific tasks faster and more efficiently than humans, but no machine can yet replicate the variety of coordinated physical and cognitive capabilities than humans possess.”

My advice to the robots: stay in school.