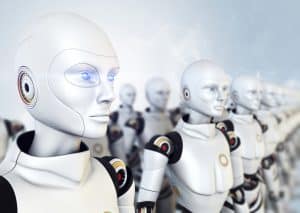 Demand for AI developers is fierce. High-level interdisciplinary projects help companies attract talent in the race against other tech companies.

A prime example is Tesla’s work on a bipedal robot for 2022. This project underscores the interdisciplinary reach of some of the most established tech companies. Elon Musk announced earlier this year that work on Optimus would take a more significant part of the company’s focus moving forward.

The robot isn’t out of left field. Much of the work completed in the race to become the first provider of truly autonomous vehicles can also be applied to other autonomous machines. Musk was clear that if Tesla didn’t do it, someone else would.

The goal is to have a working prototype by the end of 2022. If successful, Tesla has suggested that the first deployments for the robot would be at its factories, helping reduce the risk of certain jobs on humans and improving overall efficiency.

The robot isn’t shaping up to be Tesla’s main project, not yet anyway. However, the work required to get from development to a working prototype could benefit Tesla in two distinct ways.

Musk believes the robot will contribute significantly to making Artificial General Intelligence –robots that learn concepts and tasks the way humans do – a reality. For Tesla to get there first would cement the company’s contributions to the AI race.

The project seems to be gaining greater importance within the company’s product and development, although recent events on the global stage may once again shift the company’s priorities. However, there’s enough buzz around Optimus that we could see an unveiling of Tesla’s work later this year. We’ll be keeping watch.