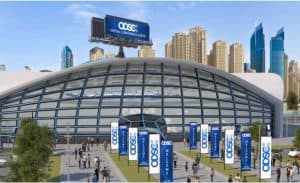 Rather than an endless string of traditional webinars, the virtual ODSC East conference (like other virtual conferences) put the attendee in a normal conference environment.

This month’s Open Data Science Conference (ODSC) East, like all recent events, became a virtual conference due to COVID-19. More than 7,150 people attended the online conference and took part in a full complement of keynotes, workshops, training sessions, and simultaneous talks throughout the conference.

Naturally, COVID-19 was a major theme. Among the highlights was an insightful talk from Jason Wang of Stanford University on “How Can a Democracy Effectively Respond to COVID-19: Lessons from Taiwan,” and a data science COVID-19 track. In total, there were almost seven hours of COVID-19 talks. The conference organizers are making this material available for free.

Additionally, artificial intelligence (AI) was pervasive throughout the conference. There was a half-day, hands-on workshop on “Actionable Ethics for Data Scientists” led by Christine Chung and Emily Miller, Data Scientists at DrivenData. There was also a “Workshop on Uncertainty in Deep Learning” by Rebecca Russell, Machine Learning Scientist at Draper. Plus, there was a tutorial on “Missing Data in Supervised Machine Learning,” by Andras Zsom, Lead Data Scientist and Adjunct Lecturer in Data Science at Brown University, Center for Computation and Visualization.

In addition, some notable sessions included talks on:

As attendees entered the ODSC East virtual conference, they were placed in the lobby of a convention center. There were an information booth and doors to enter an exhibit hall, a career hall, a training hall, and an auditorium where the keynotes and session talks occurred. There also was a lounge for participants to network.

The attention to detail in these virtual conference environments is impressive. For example, the exhibit hall is similar to what an attendee would encounter in an in-person event. There are places for demonstrations, and every vendor has a booth. Depending on the vendor, a booth visit might include a product demo, literature handout, and a chat with a technical person on hand for the conference.

Given the success of the virtual conference and the fact that large gatherings will likely not be allowed in the near future, this year’s ODSC Europe also will be a virtual event. It is slated to run September 17 to 19.

ODSC West, scheduled to be held October 26 to 30, in San Francisco, is still (at the time this article was posted) on as an in-person event. And ODSC East will return to the Boston Hynes Convention center in May 20201.