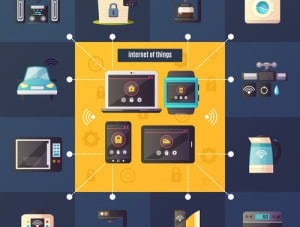 A PwC report finds the automotive industry is investing the most heavily in IoT applications. But others aren’t far behind. And a second survey from HPE Aruba looks at IoT adoption in industrial, healthcare, retail and government sectors.

Where is the Internet of Things (IoT) having its most profound impact? It’s a trick question: The answer is all over the place, in many forms, shapes and sizes.

That’s the word from a recent study released by PwC, which finds every sector has its own flavor of IoT applications. PwC’s researchers say the applications fit into two broad categories: “the creation of smart, connected products, and the collection of data to improve business performance.”

The PwC report finds companies within the automotive sector are investing the most heavily in IoT technologies and approaches, followed by those in the technology, media and telecom sector areas. Government organizations, utilities and hotels are also pouring money into IoT.

The PwC report’s authors dive into how IoT money is being spent, noting that product, service, and business-model innovation and content as well as engagement platforms top the list. “In three years, corporate focus will broaden to include digital culture development, customer experience, operations platforms, and back-office transformation,” they predict.

The varied applications seen across industries was also explored in a survey of 3,100 executives conducted HPE Aruba. Overall, more than half of companies, 57 percent, have already adopted IoT technology, and by 2019 that number is expected to reach 85 percent, the HPE authors state.

The following are examples of how IoT is being put to work across selected industries identified by the HPE report authors:

Industrial: “With a 62 percent adoption rate, industrial organizations reported using IoT devices such as chemical sensors (62 percent) and picking systems (46 percent) to reduce operational risk and address downtime. IoT has the greatest impact on the sector when it is used to monitor and maintain operating infrastructures (31 percent).”

Healthcare: “Six in 10 healthcare organizations are already using IoT, with patient monitors (64 percent) and X-ray/imaging devices (41 percent) among the main devices connected to the network.” Another 22 percent of respondents gave their number one IoT use case as remotely tracking assets by location.”

Retailers: “Just under half (49 percent) of global retailers have deployed IoT technology, and a large number of those (56 percent) are allowing personal mobile devices to access the network in order to create new and engaging retail experiences. A leading application of IoT is to create store location services that deliver personalized offers and product information to shoppers (30 percent).”

Governments: “At 42 percent, governments are further behind in their adoption of IoT.  Governments are already connecting building security systems (57 percent), street lights (32 percent) and vehicles (20 percent) to create a coherent technology environment that will underpin the smart city of the future. The most popular application of IoT is the remote monitoring and control of devices within the city boundaries (27 percent name this their number one application).”