Home / Blogs / IoT in the Real World / We’re All Being Tracked — Who’s Okay With That?

Welcome to the data-sharing economy.

As I write this article, I’m traveling on the West Coast and carrying my phone, pad computer, and computer, all with their own GPS, Bluetooth, and WiFi systems.  To make matters even more complex, I’m also wearing a FitBit that has a GPS as well.

So if somebody wants to track me down, it won’t be too difficult.  What’s more, you could pretty much interpret everything that I do in a day.

Most of us say, “I don’t have anything to hide,” so tracking people seems an interesting often helpful byproduct of IoT.  Indeed, we find lost or injured people all of the time by tracking their devices.  However, what happens if the same mechanisms are used by stalkers or other criminals for less-than-honorable purposes?  That’s certainly going to happen.

IoT security and privacy, in fact, are still major concerns.  The Mobile Ecosystem Forum (MEF), a trade body for the mobile industry, found that privacy – or the lack thereof – is still a major concern for device users. The effect of the IoT on security is a concern for 70 percent of users in the United States and 69 percent of users in France.  This compared to a global average of 62 percent, according to the report. 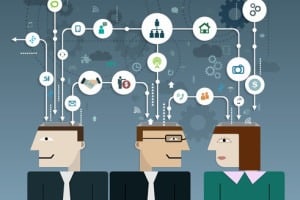 As a geek, I’m happy to carry around devices that can track me. However not everyone is as enthusiastic.  I know people who use phones that don’t have GPS just to keep their whereabouts private.  While that’s more common amongst the tinfoil hat crowd, they do have a valid concern, and we’ll all have to deal with it at some point.

Complicating things further is the number of devices that now communicate over the Internet, including my thermostat and ceiling fan, that are all controllable by my phone.  Moreover, we have more personal devices, such as wearable devices that transmit medical data beyond just the number of steps taken in a day, and, of course, doorbells, security cameras, and our vehicles.  Basically, every device we own that costs over $100 is going to be an IoT device that knows where it is, what’s going on, and is willing to share.

There are steps you can take to ensure privacy, such as turning off GPS and communication services on these devices.  However, that also makes them useless for your own data tracking purposes as well.

So, what’s an IoT paranoid person to do?  We’ll, you can certainly keep off the grid and not carry or use any devices that communicate outside of themselves.  It’s really not giving up that much, at least, not right now.  But you’ll miss out on more and more as IoT technology progresses.  I’m going to stay connected and trackable for now, and hope for the best.  Want to join me?

Interoperabilty: Why the IoT is broken