Home / Tools and Tactics / Enterprise IoT platforms / Is IoT Development that Different from Web Development?
This blog post was produced by RTInsights in collaboration with Red Hat. 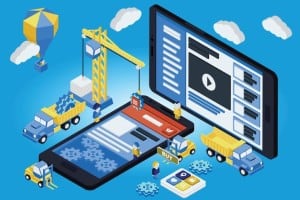 Our latest survey unearthed some surprising feedback from enterprise IT decision-makers on the IoT development process.

When you think about IoT development, there’s not a lot that’s new. Data streaming, data collection, events, decisions, processes, messaging, and integration are all developer activities that are supported by mature tools. Is IoT just another opportunity for vendors to sell or update developer tools? We decided to find out with a survey that looked at the intersection of IoT, developer tools, and open source software (see “Research Objectives and Methodology,” below, for details on the 2017 Worldwide IoT Innovation Survey, conducted by RTInsights).

When we asked survey respondents about the most important differences between IoT and conventional application development, the responses were as predictable as they were surprising. Figure 1 shows that just over half of the enterprises surveyed (51 percent) said that the IoT solutions they were developing must be inherently reliable and scalable. This was a predictable finding. IoT is typically far more data intensive than web applications. Data collection is either continuous or more frequently buffered. This buffering (periodic uploading of time-series data) can create unpredictable peak workloads, especially as the number of edge devices scales. Applications must therefore be reliable (always on) and scalable (able to instantly handle unpredictable and sizable peak loads). 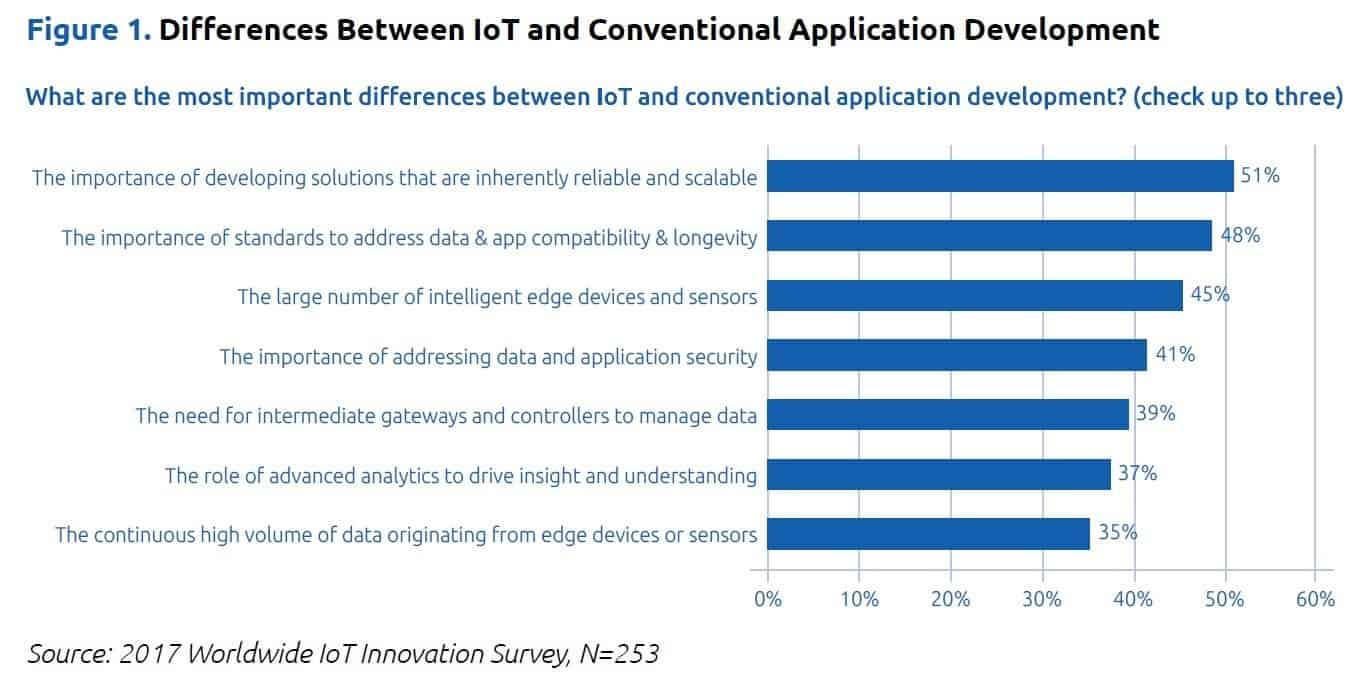 One of more surprising findings was the importance of standards to address data and application compatibility and longevity (48 percent of respondents). The wide number of use cases in IoT means that there are already many communications protocols in use, and many more likely to emerge given the frequency of data collection, variety of wireless communication methods, reliability and security requirements, and system topology.

IoT-specific protocols already exist at every layer of the OSI (open system interconnection) model, and the wide number of use cases across vertical industries guarantees that many new standards will emerge. The relatively high-ranking position of standards compared to other responses is a little unexpected because it is a more strategic issue and one that takes time, commitment, and investment to address. Therefore, it is encouraging to see that large enterprises recognize the significance of one of the more complex issues associated with IoT development.

The large number of intelligent edge devices and sensors (45 percent of respondents) is a classic characteristic of IoT. This response was expected but speaks to the inherent complexity of managing data collection. Another layer of complexity due to data collection is how to aggregate, summarize, and stage data. This is often a role for gateways that can also extend deeper into analysis while insulating and protecting back-end servers from the large array of edge devices and sensors.

While the performance of data and application security (41 percent), gateways to manage data (39 percent), and advanced analytics (37 percent) are farther down the list, these attributes are all important dimensions of IoT applications. The difficulty in mastering each of these characteristics should not be underestimated.

Our position is that IoT application development is generally very different from conventional web/mobile development. Despite today’s internet-centricity of both of these approaches to building applications, we advise you not to underestimate the new challenges and modern application development techniques that are necessary to succeed with IoT development. To effectively address all of the differences listed in Figure 1, developers will need to be at the top of their game because of the sophisticated architecture, communications, infrastructure, and analytical demands that IoT requires.

For more information on our survey, click to download the complete survey report, “The Impact of Open Source Software on Developing IoT Solutions.”

Research Objectives and Methodology: This article highlights key findings from the 2017 Worldwide IoT Innovation Survey conducted by RTInsights and sponsored by Red Hat. The objective of this survey was to understand the impact of open source software on the development of IoT applications. We targeted IT decision-makers at large and very large enterprises in October and November of 2017. Our sample of 253 IT decision makers was split nearly evenly between senior managers in IT operations and application development. The enterprises that we surveyed spanned all major vertical industries other than those directly involved in providing IT services and support.