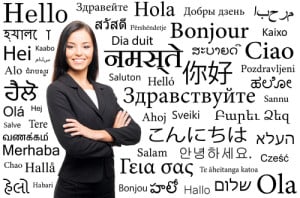 Real-time translators aren’t just about asking for directions in a foreign country. There’s business demand for this technology. And Microsoft, for one, is gearing up to meet it.

As anyone who has converted text from another language knows, machine translation can be clunky – but it gets the job done. Now, taking a step further, some vendors are upping the capabilities in this space with real-time spoken translation – either through desktop systems or earpiece devices.

First, let’s look at the desktop system market real-time translators. Both Microsoft and its Skype subsidiary have been active in this area. Microsoft recently unveiled what it calls its PowerPoint “Presentation Translator,” an add-in that provides voice translations from presenters, through an iOS, Android or Windows app.

Skype, for its part, released real-time translation capabilities in 2015 for desktops, and the tool is capable of converting video calls in English, French, German, Italian, Mandarin and Spanish and 50 messaging languages inside the Windows app.

So, real-time translators aren’t just about asking for directions in a foreign country. There’s a solid business case to be made for this capability. Microsoft is gearing its offering to seminars and workshops, while Skype facilitates online calls or conference calls between individuals from different nations.

Also, as Tom Tseki points out in a recent post at ITSM.tools, real-time translation systems can be instrumental for corporate functions such as IT service desks. “Ultimately, hiring bilingual staff for every language isn’t a realistic strategy for most IT service desks,” he writes. “Real-time translation technologies allow organizations to communicate across languages and communications channels – using their existing service desk communications platforms and staff.”

Earpiece technologies, however, require more work to be done. As Andrew Hitchcock explains at the United Language Group site, these devices are not living up to the hype. Machine translation hits limits in informal conversation, with problems picking up pronunciations, accents, grammar, idioms and slang.

The desktop translation systems are geared toward business-speak, and thus a better “trained” for many of the keywords and phrases. Progress is being made, but there is still work to be done. We aren’t anywhere near the Star Trek universal translator. (Klingon has an actual vocabulary that can be taught, however.)