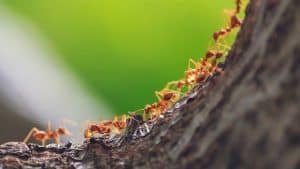 Simulations showed the system to be highly effective and accurate, with diverse group behaviors among the swarm robots.

Researchers at the University of Manchester have built a new technique for swarm robotics, based on how ants release pheromones into their environment.

Through this, individual robots may be capable of communicating with one another in remote areas, and one could notify others of a problem that needs fixed, like a burst pipe.

“More specifically, we wanted to emulate how ants release pheromones and the behaviors that follow. We use the developed system in swarm robotics applications, and we are now investigating the possibility of testing it in real-world settings.”

The system uses light to emulate pheromone release, called the COSΦ system. The researchers ensured the model was accurate in real-world environments, such as underwater and during intense weather conditions.

“The model we proposed is a reliable and realistic model that can imitate pheromone communication among insects,” said Arvin.

Simulations showed the system to be highly effective and accurate, with diverse group behaviors among the swarm robots. “Our paper introduces a robust, open-source experimental setup that can be used to implement more complex behaviors typically observed in social insects,” Arvin added.

The team is now looking to move onto real-world tests. It sees light as being a potential source of data transfer for small packets, allowing thousands of small devices to communicate without cellular signal.