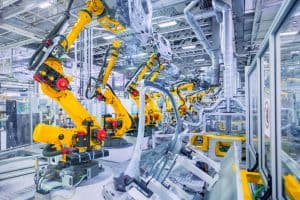 The decision on whether a robot or human should complete a task can itself be decided by an algorithm, which could lead to better alignment of job roles.

Businesses in all industries are looking at ways to automate workflows, freeing up employee time for more complex tasks and improving productivity. For businesses taking their first steps at automation, knowing the advantages of automation and which parts of the workflow to automate can reduce the time needed to implement and teach the robot.

There are tasks that can be done more efficiently by a robot and tasks that need human supervision or operation. One of the root causes of Tesla’s production delays in 2018 was overreliance on robots and lack of factory floor supervision, and Tesla did scale-back its initial plans to fully automate its factories.

SEE ALSO: How to Streamline Your Automation Efforts in 2022

Amazon, which has used robots in its warehouses since 2018, has focused more on helping warehouse workers in their day-to-day. Amazon robots operate similar to a forklift driver, carrying boxes to sorting and packing areas, reducing the time warehouse workers spend carrying items. Once sorted, the robots can then load the items into Amazon’s trucks.

Through interaction with warehouse workers, Amazon has been able to add new features to its robots and teach them different roles inside the warehouse. This is something all businesses that are implementing automation should look out for, improvements that come from interactions with employees.

This feedback loop is critical for finding value through automation, as a robot may not be considered worth the initial cost in its first iteration. Researchers at Carnegie Mellon University’s Robotics Institute developed an algorithm planner to assist businesses on which tasks should be given to a human and what ones the robot should complete.

The algorithm, called ‘Act, Delegate, or Learn’ (ADL), also informs businesses on when it would be valuable to teach a robot a new task.

“There are costs associated with the decisions made, such as the time it takes a human to complete a task or teach a robot to complete a task and the cost of a robot failing at a task,” said Shivam Vats, the lead researcher and a Ph.D. student in the Robotics Institute. “Given all those costs, our system will give you the optimal division of labor.”

ADL, which was presented at the International Conference of Robotics and Automation in Philadelphia, decreased the costs of completing a task by 10 to 15 percent when compared to traditional models.

Robotics is not the only field where automation decisions need to be taken into account. Robotic process automation (RPA) and other business automation technologies are targeting regular office workers, alleviating a lot of the monotonous admin workload.

However, as with factories, businesses in other fields need to be wary of too much automation, or automation that is aimed purely at lowering the headcount at an organization.