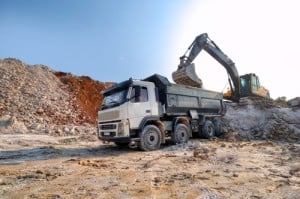 How a real-time traffic control system helps save $300,000 a year in haul-truck efficiency and fuel at just one mining site intersection.

A typical large-scale mining operation involves trucks and other large pieces of equipment—hauling tons of ore—crisscrossing each other almost constantly. With this busy activity comes a risk of accidents. In addition, the constant stopping and starting of vehicles hauling tons of ore expends extra fuel, which can get costly. Traffic control is therefore a priority.

Mining companies make massive capital investments in equipment purchases and operations, and the use of hauling trucks is a critical to operational efficiency and safety. For Newmont Mining Corp., one of the world’s leading gold, ore and copper producers, this meant applying technology to better coordinate and streamline the movement of its vehicles and heavy equipment at its sites. The hauling process has significant costs associated with fuels, tires, lubricants, oils, and the general maintenance of the haul truck fleet.

Newmont Mining Corp. has locations across the United States, Australia, New Zealand, Peru, Indonesia and Ghana. To increase the efficiency and safety of its trucking operations, Newmont contracted with Cirrus Systems to deploy its Haul Truck Priority Service (HTPS) system at a Newmont mine in Northern Nevada. The system features real-time control and management that enables users to monitor and control traffic systems concurrently. Real-time operational control, analysis and adjustments can provide users with significant gains in operational efficiency, cost controls, productivity maximization, and enhanced safety

A total of 18 vehicles from the mine’s haul-truck fleet were outfitted with hardware that linked to trucks’ existing GPS systems, enabling the collection of position and other relevant data. These datasets were used to measure haul truck performance during regular operation. Traffic signals were also installed at key intersections. The system took advantage of a wireless network already in place at the mining site.

The system is designed to work in medium to high-traffic intersections, replacing passive traffic signs with Cirrus’ proprietary automated system that enable haul trucks and other selected mobile equipment to be continuously tracked from the mining company’s on-premises central communications site in real-time, giving priority to the haul trucks at the intersection. Quantitative data included time and speed through the intersection, and a fuel consumption data logger was installed to estimate average fuel savings. Qualitative data consisted of an assessment performed to evaluate the operator’s work environment, potential human factor challenges, and safety issues while negotiating the intersection.

The system helps avoid the potential for driver misjudgment or error, and gives larger trucks priorities at intersections. With drivers not having to start and stop their fully loaded trucks at intersections, the company has seen notable cost savings.

The overall results of the first pilot project revealed notable decreases in time, along with increases in speed for all haul trucks going through intersections in five of the six possible directions. The system saved an average of 12.21 seconds and 0.1760 gallons of fuel per occurrence. This added up—in 546 passes through the intersection during the evaluation, for haul trucks traveling in the direction from “Open Pit” to a “Main Street,” the savings were the equivalent of 1.85 truck hours and 96.10 gallons of fuel.

With a haul-truck cost per hour of $300, and the fuel cost per gallon at $3.50, savings based on the single pilot project intersection equated to more than $30,000 per year. When projecting these savings into a second intersection, with higher haul-traffic volume (~50M tons annually), the total annual savings for that new intersection is estimated to be over $700,000, in addition to the non-quantifiable safety component.

The system is also easily adaptable to changing traffic patterns and peaks and valleys in materials flow. The system also can be extended to additional functions, such as tracking real-time fuel consumption.

Putting IoT Safety First
Frontiers in Artificial Intelligence for the IoT: White Paper
Research from Gartner: Real-Time Analytics with the Internet of Things