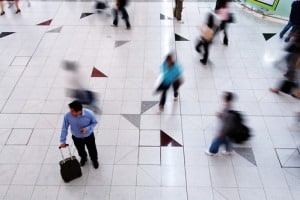 Real-time data is everywhere, and we’re all willing partners in providing it. But there are still plenty of wrinkles to smooth out.

As a member of the RTInsights world, I revel in, and report on, stories on how real-time technology deployments solve real-world business problems and make life better for customers. But some recent episodes in my life — experiencing the highs and lows of real-time, digital customer experience — suggest that we’re nowhere near real-time nirvana, and there is great deal of work that still needs to be done.

Real-time insurance claims: First, I was nearing the end of a three-year car lease when my car’s front wheel slipped off a ground-up piece of road and caused me to scrape up against a guardrail. (Which I Iater found out was called being “gutterballed.”)  When I contacted my insurance company, they informed me that they would not send a claims rep out — rather, I can just download a helpful app and take pictures of the damage to receive an estimate. I followed the instructions with the picture-taking and was able to upload the photos and report and receive an estimate within 24 hours. (A WIN for the digital future, or so it seemed.)

However, after I dropped the car off at the collision service, it sat for three weeks before the work could be completed. Why? Because the collision shop spotted some ancillary damage — not visible on the app photos — that required the insurance company to send an adjuster out to verify and update the claim. It required several phone calls from me and the folks at the collision service to finally get an adjuster to come out to the shop. As I learned through the course of this experience, the insurance industry lobbied the states (the regulators) fairly heavily to allow for digital estimates via smartphone apps. However, the result is overworked claims adjusters needing to make additional trips anyway to investigate damage that escapes the eye of the smartphone camera.  (A FAIL for the digital future.)

When I did sign the new lease, the confirmation and paperwork all were directed, for some reason, to my youngest daughter’s email address — who never bought a car in her life. I worked with the dealer’s rep to try to clear her email out of their contact systems (no one has a clue how it even got there). Still, the notification for the first 1,000-mile checkup still showed up in her inbox. (FAIL)

Real-time airline flights. On a flight out of San Francisco, we were all boarded, seated and strapped in on the plane when the pilot came on and gave us some bad news: a cargo door latch was found to be damaged, and the plane had to go back to the hangar for repairs. We were instructed to head back to the gate counter to rebook. As the flight was a fully booked Airbus 320, more than 200 of us had to stand in a long, slow-moving line at the counter.  About 20 minutes later, I and others in line received a text message from American Airlines that the “departure time has changed. New time of departure is 9:00AM” — which was 10 minutes away when sent, so obviously, a little behind events. .

About 20 minutes later, with the rebooking line still not moving, I received another text, finally acknowledging that the flight was canceled, and this more reassuring message that “We’re working to rebook you and will send an update soon.”  That update never came. I waited another 30 minutes, and as I saw other passengers were leaving the line with automated rebookings, I checked my itinerary on the AA website. Sure enough, they had automatically rebooked me on a later flight, with one brief layover in Phoenix. That was wonderful, but I wonder how long I stood in line not knowing this was already done for me?

When I finally arrived at my destination, my suitcase did not successfully follow — no surprise. But American did a stellar job notifying me right away — the text was on my phone as soon as I turned it on upon landing — and keeping me updated on its delivery progress the next day to my house. (So a mixed PASS-FAIL score here… the airline almost got things right, except for the hiccups that caused me to wait in a rebooking line, unnecessarily, for more than an hour.)

Real-time parking: Hopping a NJTransit commuter train to New York has become an app-driven affair. I use a parking app to pay for a parking spot even before I leave the house, and NJTransit’s app to purchase the train tickets. Recently, one early morning, the parking app failed when I attempted to pay for one day of parking — giving me a convoluted message that I have free parking, but I would still need to pay an administrative fee. Then, as I attempted to complete the transaction, it was blocked by an error message. I was concerned about getting a ticket or my car towed from the lot while I was in the city, and there was no on-site way to pay.

However, the only technical support contact information associated with the app was an email address. I sent three emails reporting the trouble and even got an automated response with a trouble ticket number. But never received a response, period. On the train, I learned many others were having the same issue with the app that day. It was only after I hectored the parking app vendor on Twitter that I finally got someone to respond. (FAIL)

Oh, by the way, if that wasn’t enough — the NJTransit app still requires you log in and activate the ticket after you purchase it. Of course, that same morning as the parking app fiasco, once on the train, I couldn’t get mobile phone reception to activate my ticket to show the conductor. Fortunately, he was very understanding and came back to me later after I finally was able to connect. (I’ll cut NJTransit a break on this one, but it can get dicey if you need mobile reception at the moment your ticket needs to be activated.)

So, from an end-user customer point of view, the real-time digital economy is promising to make things faster and more convenient — but things still need to be straightened out. Systems need better integration, customer service needs to be top-notch and ready to respond to events, and insurance companies better think twice before they consider reducing their ranks of claims estimators.