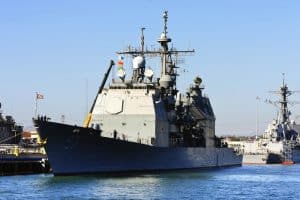 A greater understanding of a machine’s life and health is critical for the military. Predictive maintenance enabled through small IoT devices will help track the health of specific parts of a ship.

Artificial intelligence has already been deployed in other areas of the U.S. Army, and the DIU is actively working to have predictive maintenance added to the Air Force fleet as well.

Speaking at the Dell Technologies Forum on Real Transformation, DUI Director of Strategic Engagement Mike Madsen said that they were in “very advanced discussions” with the Navy. The organization believes it will receive a contract next year to build the AI for the Navy.

A greater understanding of a machine’s life and health is critical for the military, as adversaries begin to probe new ways of breaking through the country’s defenses. The predictive maintenance may be enabled through small IoT devices, which track the health of a specific part of the ship.

The AI would have an overview of the entire operation, with the ability to quickly spot any abnormalities. While it is likely that most of the repair and decision work would remain with Navy officers, having an early warning system could avoid expensive repairs or failures in battle.

The Navy already deploys a wide range of sensors to check things like reduction gears, turbines, generators, and air conditioning plants. The DUI wants to expand that data collection, to include an overarching system that can notify Navy officers of issues.

“The performance of any given asset is something we want to hold close. So I think what you have to do is you have to architect this from kind of the get-go with that kind of security mindset in mind,” said Rear Adm. Lorin Selby, a chief engineer in the Navy. “You can harvest that data and you could potentially discover vulnerabilities, so you have to protect that. That’s part of my project: as I do this, we’re bringing that security aspect into the program.”