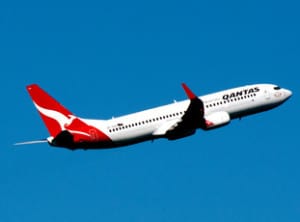 Anyone knowledgeable about the commercial aviation understands how this is a complex industry with many uncertainties. Running an airline safely and profitably requires keeping many systems running at peak efficiency – customer information, human capital management, maintenance, scheduling, regulatory reporting, energy consumption, and materials supply chains, just to name a few.

In recent years, Qantas Airlines Limited was seeing its margins squeezed to the limit by the dual forces of high fuel prices and fare wars, to the point in which the airline saw a $2.8-billion loss in fiscal 2014. The airline “was facing an uncertain future,” a new case study reports.

In 2014, the airline embarked on a turnaround effort to increase services while also increasing its margins – with a goal of paring down at least $2 billion in costs. One area the company took a hard look at was its spare parts supply chain, where spare parts are distributed to 70 locations across the globe for maintenance. The airline recognized that it could potentially reduce its costs in this area by instituting real-time views and forecasts of its inventory. The goal was to reduce supply-chain costs by at least 30 percent.

How this opportunity or challenge was met

Qantas sought a toolset and platform that would replace its aging enterprise demand planning system, which did not allow users to interact with the forecasts or inventory recommendations.

The goal was a system that would ensure parts would be available at the right time and place. The airline invested in PTC’s Service Parts Management solution to achieve this capability.

[ Related: How to forge a Real-Time Link Between Manufacturing and Actionable Data ]

The company’s real-time supply chain transformation program is a four-stage process that is still ongoing, the case study relates.

The stages include consolidating and streamlining the maintenance organization, re-engineering processes, followed by “working on continuous improvement to increase our operational efficiency, planning capability, and visibility of data.”  During this stage, the airline’s team seeks to reduce total cost of ownership, improve aircraft dispatch reliability and parts availability while drawing down the airline’s inventory so it aligns with aircraft end-of-life.

“Developing accurate inventory forecasts was critical for meeting these requirements as Qantas needed to have enough parts on-hand to ensure a high level of service without maintaining too much expensive inventory,” according to the case study.

The fourth stage focuses on collaborating more deeply with customers and suppliers to help improve the airline’s “ability to predict changes and risks in its network.”

[ Related: Scaling SQL for Time-Series Data in IoT Use Cases ]

Benefits from this initiative

The real-time supply chain inventory and parts forecasting system has played a large role in Qantas’ turnaround in recent years. In its most recent fiscal year, 2016, the company saw the best financial performance in its 95-year history, with $1.5 billion in after-tax profits.

The initiative also increased awareness of data quality, which is crucial to real-time decision-making or algorithms. The case study reports that while software tended to get blamed for glitches, the team was able to determine that source data was creating issues.

“After the data was sanitized, the solution began to produce the type of insights users were expecting. For example, one process report revealed the airline could release millions of dollars of excess parts from inventory while holding service levels constant,” the case study adds. With the new system, employees has an ability to more systematically manage a large volume of parts at more than 70 stocking locations. This included better classification of part categories, based on factors such as cost and usage.