Home / Analytics / If Only Santa Had Real-Time Analytics… 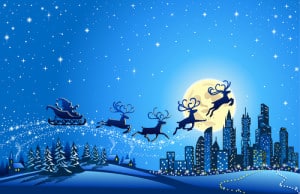 The elves have been busy all year making toys, stocking a massive inventory, and it all comes down to this: Will Santa Claus deliver the right toy, on time, to the right child?

Just like any company, the difficulty actually begins early in the year. If Santa wants to run a low-overhead operation, he must know what toys are going to be in high demand to guide manufacturing.

What’s curious about Santa is that while he has certain powers of omniscience — he “knows if you’ve been bad or good” and also “knows when you’re awake” — he usually relies on children to directly tell him what toys they want. That might occur during a mall visit or a letter, but today we live in a digital age.

To get a good idea of toy demand, Santa might look at toy search history on Google Trends, or the most popular items on ecommerce sites such as Amazon.com.  Or he might turn to a cognitive computing platform such as IBM Watson Trends that scans websites and social media reviews to look at popular gifts. He can compare that data to items the child previously wanted on Christmas — a list which he presumably has at a North Pole data warehouse — to optimize production. 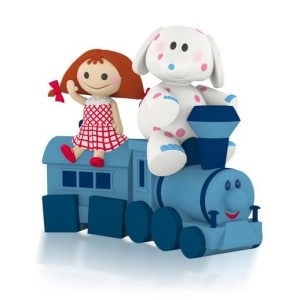 The chance of misfit toys could be reduced with IoT analytics. Photo credit: Shopord.

With a good idea of what children will want for Christmas, Santa can now optimize toy production.

Like any manufacturing operation, toy defects might occur on the production line, resulting in wasted inventory or creation of an Island of Misfit Toys — such as the “train with square wheels” pictured at right.

By using IoT analytics, Santa’s workshop becomes more efficient, reducing the chance of time and money lost on a defective line of toys.

No antlers needed, but predictive maintenance for landing gears helps.

Santa’s supply chain and delivery problem is perhaps the most complicated. Getting all the toys to kids overnight is a daunting task. Were Santa like Amazon.com, he might invest in drones and predictive supply-chain applications such as anticipatory shipping.  But for now, let’s consider Santa an ultra-fast UPS.

To start with, the delivery mechanism—-a fleet of reindeer and a sleigh—could easily fail as they traverse the globe dealing with temperature extremes and sleigh vibration, as well as acceleration, deceleration, and landing issues. Since Santa has been delivering these toys for centuries without fail, we can assume that he has tested the reindeer and sleigh against the extremes of geophysics, if not their very laws, and is also a highly skilled pilot.

But anything can happen—-a freak storm, an unexpected issue with a reindeer, or a collision with a Boeing—-resulting in a tragic “Year Without a Santa Claus.” Here’s how Santa could solve it:

He might turn to real-time weather data to plan navigation away from particularly troublesome spots, as well as a real-time complex-event recognition system to prevent collisions with aircraft.
Santa also could theoretically rely on predictive maintenance to reduce any unanticipated downtime for reindeers and sleigh. Predictive maintenance solutions are being tested for aircraft landing gear, and already are being used by the U.S. Air Force to manage its vehicle fleet. So why not a reindeer and sleigh?

Lastly, if his pictures are any indication, we can assume Santa is getting a bit old. He is also quite rotund. Health issues might surface as he exerts himself carrying heavy sacks of toys. Perhaps biosensors that communicated with an Apple Watch would alert Santa to any health problems before they become serious.

Or maybe he has been using a Fitbit all year and is in solid-enough shape to complete the Christmas dash. Let’s hope so.