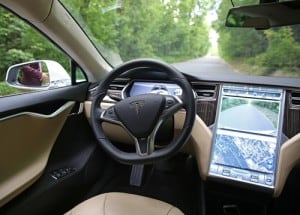 If there is anything that requires flawless implementation of real-time technologies, self-driving cars would be it.

For all intents and purposes, today’s automobiles are no longer just automobiles. They are computers on wheels, with more code, sensors and input/output systems than even the most powerful supercomputers had just a decade ago.

Take Tesla, for example. Much of the electric vehicle’s operating capabilities are based on updateable and downloadable software – not metallic components. The efficacy of this model was recently demonstrated when Hurricane Irma ravaged parts of Florida. Tesla’s battery life is based upon the fee structure the owner is willing to pay.

According to a report by Keith Collins in Quartz, “some of Tesla’s Model X and S vehicles that were introduced in 2016 come with 75 kilowatt-hour batteries that are software-limited to only offer 60 or 70 kilowatt hours, capable of 200 to 230 miles per charge.” As the storm approach Florida, however, Tesla automatically upgraded the capacity of the state’s Tesla drovers to enable them to drive clear of Hurricane Irma’s cone of uncertainty.

Evidence of the rise of real-time, software-driven driving abounds. Cars will soon be capable of conducting data analysis at real-time speeds to decipher best routes and avoid accidents. As Kirsten Korosec recently explained in Fortune, Intel and Waymo — a part of Alphabet – are collaborating on an effort to instill real-time intelligence into the upcoming generation of self-driving cars.

Waymo says “it’s using Intel chips as part of a compute platform that allows its self-driving Chrysler Pacifica hybrid minivans to process huge amounts of data so it can make decisions in real time while navigating city streets.”

The goal of the Waymo-Intel collaboration is to achieve “level 4 and 5 autonomy,” which certifies that the car is ready to drive itself. If there is anything that requires flawless implementation of real-time technologies, self-driving cars would be it. At the same time, the evolution to computers on wheels means software updates and monitoring anytime and anywhere it is needed.