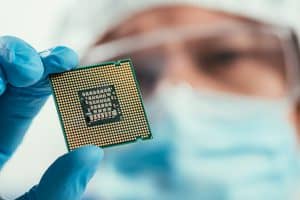 An already stressed semiconductor chip supply chain could be further disrupted if the conflict in the Ukraine drags on. The two countries are key exporters of two critical rare earth elements used to manufacture chips.

Russia’s invasion of Ukraine has far-reaching ramifications for the world, but one notable area of disruption will be in tech and innovation. As we’ve reported for months, the continuing semiconductor chip shortage is causing significant upsets in the supply chain. Removing both countries from their place in chip production is another worrying result of remaining complacent in the face of conflict. However, the world’s reliance on their supply of Neon and palladium, as well as some rare earth minerals, might encourage quicker action from industry in addition to the political response. Here’s what led up to this point.

Demand isn’t the only driver of the semiconductor chip shortage

The very first bottleneck with semiconductor production occurred because of a simple demand challenge. 5G rollouts and continued exploration of autonomous and intelligent devices created more opportunities for these chips in a greater variety of devices—from today’s intelligent automobiles to tomorrow’s healthcare devices.

A chip shortage in high-end electronics isn’t all that unusual. However, as the world begins to blend the high-end technology category with the “things we use everyday” category, the chip shortage is on our radar. In an internet-connected world, a chip shortage is a worrying trend.

Fast forward to two years post-pandemic with a touch of market sanctions on China, and you have the makes of a serious shortage. China moved to shore up its own chip supply chain from other suppliers outside the US, creating greater bottlenecks for US markets. Its reliance on foreign equipment to produce chips caused ripples with the first wave of export restrictions and continues to ramp up as the Biden Administration considers tightening them this year.

In 2021, VC investment into semiconductor-focused startups shot up from the $3 billion mark in 2020 to more than $6 billion. It underscored how pandemic-related supply chain issues intersected in a sharp increase in demand for connected devices, creating the perfect conditions for an ongoing shortage.

That funding trend hasn’t carried into 2022. While it’s still early in the year, we have seen a slower rate of funding so far from this point last year, as well as some high-profile deals that didn’t happen. For example, NVIDIA’s acquisition of ARM fell through, with the company pulling out of the $40 billion deal amid public scrutiny over regulatory concerns. It would have been the biggest semiconductor deal in history.

Other acquisitions may not quite reach that level but will still impact the overall market. Qualcomm’s acquisition of Nuvia for $1.4 billion marked a US-based deal designed to reduce pressure, while China-based Wise Road Capital acquired Korean-based Magna Chip Semiconductor for the same amount just a few months later.

In addition, the Biden Administration has made chip manufacturing a priority in its funding proposals. The new series of grants would pump billions into building a more stable, US-focused chip supply line. However, even with all this activity, a key component of chip manufacturing is on the line.

Conflict bleeds into the equation

Both Apple and Google, as well as other smaller tech companies, have announced plans to develop their own in-house chips, as well as focus efforts on optimizing current chips. We were hoping to see supply smooth out over the next year as a result. However, these efforts and more have seen complications due to rising tensions boiling over with Russia’s invasion of Ukraine. Without a quick resolution, the raw materials might pose the next challenge.

Both countries are key exporters of two critical materials. Ukraine is a primary supplier of highly purified neon gas, while Russia is the world’s leading producer of palladium. War not only restricts the flow of goods from both countries’ borders but interrupts vital industries responsible for these exports. And with sanctions rolling in to combat Russian advances, those materials may be hopelessly difficult to receive.

Investors seem to be responding already. This year’s slow-down in semiconductor-related startup investments could be related to a perceived lack of materials to get companies up and running. It’s already a monumentally time-consuming and expensive task to get new semiconductor chip pipelines started and into production; without raw materials, investor dollars could recede.

As the world waits for a (hopefully) timely resolution to chaos, organizations may begin looking for alternatives to the shortage. It won’t stop chip production altogether, but it does present yet another reason to resolve these conflicts and reduce further destruction of Ukraine’s industry and self-sufficiency.

Looking forward in the future of semiconductor chips

The possibility of prolonged war in Ukraine has reignited the search for alternative sources for these materials. The next logical supplier of Neon would be China if it weren’t for already tense tech and political maneuvering between it and the US. South Africa is the largest exporter of palladium in the African continent and could see a boost to its industry as a result of the conflict.

Regardless, the world will see shifts in the semiconductor industry due to the invasion of Ukraine. Kenya has launched Africa’s first semiconductor factory, and other companies are moving to rework the technology to include less of these raw materials in question.

It does provide yet another reason for all countries to get involved in ending the conflict in Ukraine and finding long-term solutions to diffusing the tension between the two countries. Every market now has a use for these semiconductor chips, and continued difficulties will block the flow of innovation and connectivity required for modern operations.

In the short term, both the semiconductor supply chain and the effect on Ukraine and Russian industry aren’t expected to reach critical mass. However, every moment the conflict drags on creates indelible marks in the supply chain and puts both countries back as emerging markets. It’s essential for the industry itself to call for a resolution to the conflict in addition to political actors to ensure that events don’t evolve into long-term conflict.