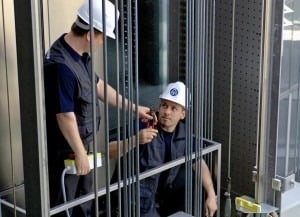 Smart elevator efforts by Huawei, Schindler, and ThyssenKrupp are discussed, with uses in predictive maintenance and efficient dispatch.

According to Transparency Market Research, the smart elevator market is expected to grow from $9.54 billion in 2015 to $26.69 billion by 2022. Key drivers for market include “rapid urbanization, rising adoption of wireless technology, increasing demand for energy-efficient solutions, and enhanced security concerns.” The Asia Pacific region is projected to be the fastest growing market for smart elevators and escalators.

As of 2015 there were more than 15 million elevators in operation, providing billions of rides a day. There are generally two key features of a “smart elevator” – predictive maintenance and smart dispatch.

Huawei has been working on their IoT platform for elevators for the past two years. It’s estimated there are around 15 million elevators worldwide, with an average service interruption of two days per year. This quickly adds up to high operating expenses. Schindler says Huawei’s platform can change that.

“If we can see the something is not going right, we can send a technician ahead of time before the elevator breaks down. It allows much more intelligent dispatching of elevators,” said Daryoush Ziai, CEO of Schindler China, an elevator and transportation systems manufacturer. “This is just an example of how this partnership can improve the user experience.”

The Huwaei platform is an IoT gateway that can be installed on each elevator and uses sensors to collect data, which is then sent to a cloud-based controller to be analyzed. Using an edge computing device to power the sensors ensures they will continue to collect and retain data in the event of a power or network outage, the company stated. The data will be used for predictive analytics and maintenance. Several layers of security are built in.

Schindler said it plans to equip all of its elevators with the new gateway, but doesn’t have a set timeline for doing so. They are planning to test the systems in China and Europe before beginning a wide deployment.

ThyssenKrupp is another company that has developed smart elevator solutions. For predictive maintenance, it has partnered with Microsoft Azure IoT and CGI to predict when its elevators might need repair.. The elevators send real-time data on their operating conditions to Microsoft’s Azure cloud system, which will use the insights to predict potential maintenance problems and faulty components before they fail. Azure will act as a single hub with instant information on millions of elevators around the world.

In addition, ThyssenKrupp has a service called “Destination Dispatch,” which directs passengers to the elevator that will get them to their destination in the shortest travel time. The system groups people together based on the floor to which they are traveling.